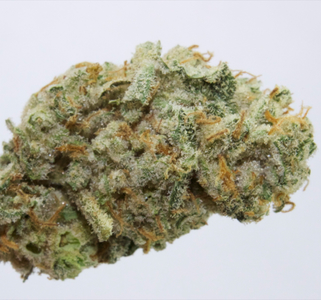 Timewreck is known for its sheer intensity and hard-hitting high. It is known to relax both mind and body, leading to a blissfully uplifted state. It’s perfect for a dreamy afternoon smoke. This mostly sativa hybrid strain is the descendant of an award-winner, and it’s popular all along the West Coast. Timewreck is an extremely aromatic strain that smells of earth and sour fruit. Unlike many strains, Timewreck tastes almost identical to how it smells.

Be warned: Timewreck’s smoke is extremely smelly and will linger wherever it's consumed for quite some time. This strain isn't for novices!

Timewreck is a hybrid strain that's about 70% sativa. It presents in classic sativa fashion, with buds being cone-shaped. Nugs should be large and dense, with an appealing deep green coloration punctuated by purple. Pistils should be large and fiercely orange, and you should be greeted by an ample amount of sticky resin upon breaking open buds.

The smell can be described as a partial picnic dropped in dirt: earthy, fruity smells form the nose, and a sourness reminiscent of cheese that often picks up the back end of the aroma. Timewreck is very high in THC, and lab tests regularly show it to have up to 27%. CBD is almost nonexistent, at under 1%. The primary terpenes found in Timewreck are pinene, myrcene, and limonene, which contribute to its sour fruit and earth flavors.

Being a sativa-dominant strain, Timewreck's effects are very cerebral. The high hits quickly, bringing a mental energy and buzz along with it. The primary effects are intense euphoria, an outpouring of creativity, and, of course, the name comes into play: When smoking Timewreck, be careful not to completely lose yourself in whatever activity you choose!

On the flip side, Timewreck can also lead to racing thoughts and paranoia if too much is consumed. Dry mouth and eyes are something to watch out for as well, due to the high THC content of this strain.

While Timewreck hasn't won any awards itself, it comes from award-winning stock. Bred by Dioxide of TGA Genetics, it's a cross between Vortex and Blood Wreck (Chernobyl x Qrazy Train) meant to bring out the best of both strains. Chernobyl was one of High Times' Strains of the Year in 2010, and its intense effects are apparent in Timewreck as well.

This strain is fairly easy to grow, thanks to its resistance to mold and pests. It grows well indoors or outside, and it's a suitable strain for those who have not grown cannabis before. The breeders at TGA Genetics recommend topping the plant into four or more top colas to ensure the best growth and yield.

Timewreck has anaverage grow time of 8-9 weeks and can yield up to 21 ounces of marijuana per plant if grown outside.

Where to Find Timewreck

Timewreck is particularly popular on the West Coast, especially Seattle and Portland. It can be more difficult to find in Colorado and California, however.