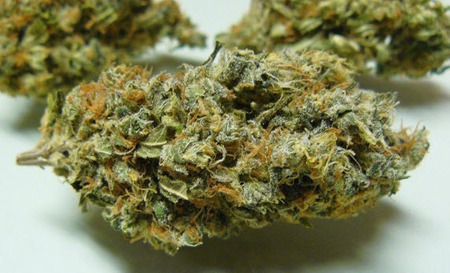 Shiva is a powerful indica strain with close landrace background. Name after the Hindu God Shiva, it was created and cultivated in the 1980s at Holland's Cannabis Castle. It has continued its decent parenting many other strains. This cross between Northern Lights and Skunk is a wonderful relaxing, sometimes sedative strain. It has a pungent spicy aroma undercut with skunk. It's not the best tasting strain as it lacks any fruit, sweet, or citrus flavor. It has a pungent woody, earth and soil taste.

Shiva usually has over 20 percent THC but it can go as low as 15 percent. This 80% indica phenotype is bright green and full of orange hairs and dusts of white crystals. It's extremely dense and full of resin. Shiva will produce dark, mint-like leaves over small sized buds. By the end, you'll have a nice combination of small, hard buds with dark green leaves.

This strain has wonderful effects that trigger the body. This is not a strain to be used during the day as it is powerful. The relaxing techniques will have you feeling heavy and calm. It lasts for hours and provides happiness during relaxation. Shiva may leave you with the want to go to sleep. If taken in heavy dosages you will be sedative earlier in the session. Use this at night.

Shiva has the typical adverse effects. Some who use it say it produces dry eyes and mouth, headaches, and paranoia.

The Lineage of Shiva

Growing Northern Lights can be done easily in between two and three months Indoor produces three ounces per square.

Skunk is a strain well known for its relaxing capabilities. Created by Sacred Seed Company, Skunk is a cross between Afghani, Acapulco Gold, and Colombian Gold.

is easy to do since it has a. They don't grow tall reaching slightly more than two and a half feet. Hydroponic systems are recommended. The environment can vary but will not grow correctly in cold climates. It is available in both auto-flowering and feminized seeds.

Plants grown indoors takes seven to nine weeks for completion. It yields 18 ounces per 10 square feet. Growing Shiva outdoors has an October deadline. The yield for outdoor growing is optimal. It is resistant to pests.

Where to Find Shiva

Shiva is a not a popular strain yet. It can be found in a few dispensaries as someone got their hands on it. Start with the recreational legalized states such as Colorado, Oregon, and California