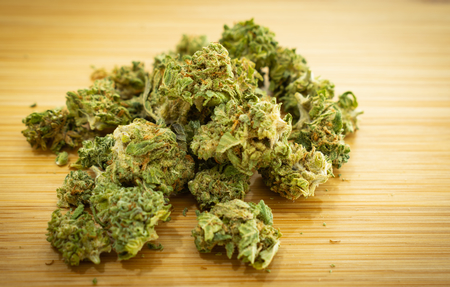 EUPHORIC
Northern Lights is a renowned indica cannabis strain known for its quick and heavy high, citrusy-yet-sweet skunkiness and fast gestation period. The strain is popular due to its few negative effects and soothing, full-body high.

Said to hail from Washington, Northern Lights has cultivated international recognition as a smooth indica that soothes a stressed body and mind. The strain debuted in Seattle as a pure indica before hybrids, mixed with Thai sativa, joined the scene and were fine-tuned in the Netherlands. Though shrouded in mystery, the theory that Northern Lights bloomed from Afghani seeds. The strain has been an international Cannabis Cup winner since the 1990s and continues contribute to new hybrid strains. To date, 11 different indica strains have adopted the name. Some users consider Northern Lights 5 and Northern Lights 1 as the best variations.

Northern Lights is a fairly potent marijuana strain. Various growers and lab test results report THC potency averages of around 16-17%, with highs that can skyrocket up to 26% THC. CBD percentages vary with each plant and are recorded at 0.04%. The strain gained popularity for its fast-acting high and minimal negative effects. Critics and commentators alike reserve Northern Lights for evening smoking. The relaxing sensation balances a full-body high with sedative mental effects perfect for lulling yourself to sleep. Veterans recommend smoking Northern Lights before a movie or another low-key activity.

The quick-hitting effects of Northern Lights include euphoria, happiness, uplifted feelings, as well as mental and physical sedation and sleepiness.

Northern Light strains can occasionally leave users with dizziness and headaches. More common side effects include cottonmouth, dry eyes, and dehydration. Those inexperienced with the strain tend to feel the couch-locked effects of the indica more than experienced users.

The Lineage of Northern Lights

Northern Lights has a bit of a hazy lineage. Many believe Northern Lights was first inspired when a humble grower crossed Afghani and Thai genetics. Thai is a classic cannabis strain, owing its name to the beautiful buds native to Thailand. Thai is known for its relaxing, energetic, and focused high. Thai has an earthy, sweet pine aroma. Afghani is another classic strain, also known as a landrace strain, named after the region of origin. Afghani is known for its hunger-inducing, sedated high. Northern Lights possesses a distinctly sweet smell yet is pleasantly punctuated with hints of citrus. When smoked, the bud balances earthy notes with lemon and lime to leave a pleasing taste in the mouth. Sativa phenotypes commonly found in Northern Lights varieties foster the fruity flavors and the cerebral high. Nugs of Northern Lights tend to be skunky and resinous. The green buds are dense and threaded by golden orange pistils throughout the nug.

Northern Lights is generally known as a resilient and easy plant to grow both indoors and outdoors. Outdoors, the strain thrives in the warmth and sunshine similar to Californian, Mediterranean or North African environments. Inside, Northern Lights can yield an estimated 22 ounces per plant and is best harvested in mid-October. It generally takes six to nine weeks for the strain to flower indoors; the average days for flowering is 47. While shorter, the plants produce high yields around 8 ounces per square meter in a healthy environment. Plants grow best as a multi-branch plant and when packed with moderate to heavy nutrients. The higher calyx-leaf ratio also makes the plant easier to trim.

Where to Find Northern Lights

Since Northern Light's heyday in the Netherlands, the strain has gained popularity along the West Coast in California, Washington, and Oregon. The strain cultivates a new generation of fans in Colorado, the new frontier of cannabis. Northern Lights remains as one of the most talked-about and smoked strains due to its fast flowering time and effects, pungent smell and resin-heavy nugs.