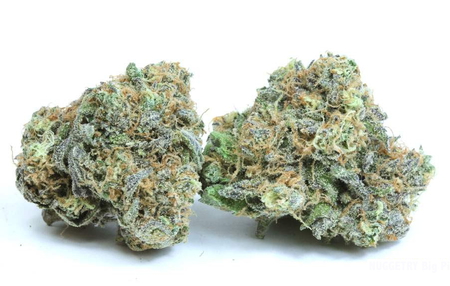 This indica dominant plant has exceptionally dense buds with a sweet smell. Mr. Nice will creep up and provide you with a strong, mellow high. Sensi Seeds claims that Mr. Nice's "double Afghani" scent is enticing enough to make your mouth water. The strain's dense bud clusters should produce sticky nuggets with a rich yet spicy tang of resin.

Mr. Nice buds should have a darker coloring and underlying muskiness, typical of indica varieties. This strain is known for packing a punch and has a high THC content of around 17 percent to 20 percent THC. Mr. Nice is an excellent nighttime strain and is an ideal way to end a day.

When smoking Mr. Nice, smokers report a powerful sense of euphoria, enough of this strain uplifts their high into new levels. The high can end with a deep sense of relaxation and fatigue. Mr. Nice lulls in users with its sweet yet earthy flavor profile and dense buds that glisten with resin. Some do attribute a certain sneakiness to the strain's high and claim that Mr. Nice creeps up on you.

Mr. Nice can be almost too powerful for new smokers. Those that are new to cannabis or even indica strains can get overwhelmed by Mr. Nice's intense stone. Commonly, Mr. Nice users report dry eyes and dry mouth. Less frequently reported adverse effects can include dizziness, headaches, and paranoia.

The Lineage of Mr. Nice

Mr. Nice was limitedly released in the 1980's but has since returned to the revitalized cannabis market. Inspired by the throwback love of the 2010s, Sensi Seeds has brought the strain back. Mr. Nice is a combination of the G-13 strain and the popular Hash Plant. G-13 is another potent indica strain with high resin quality and THC production.

G-13 quickly achieved the status of a living cannabis legend and breeders jumped on the chance to capture G-13's spirit. The Dutch seed bank created the Hash Plant breeding program to capture the magic of original G-13 strains. A perfect match between a G-13 and Hash Plant strain was found and relaunched in 1999 under the Mr. Nice moniker.

Mr. Nice is a suitable seed for growers experienced with harvesting larger yields and more pungent crops. Many have tried and failed to cultivate this unique strain. Those with the grower's "green thumb" can nurture Mr. Nice seeds to yield two to four ounces per plant. Plants, however, do require more intense care and consideration.

Where to Find Mr. Nice

Mr. Nice is not an easy strain to find on the market. Oregon is the most likely state to have Mr. Nice on its shelves. Otherwise, Canadian Provinces are also known for having access to Mr. Nice.

Check with your local dispensary to see if they have any Mr. Nice on their shelves, here!