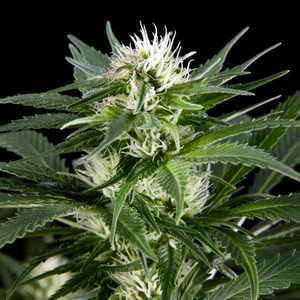 Like its namesake, the Great White Shark strain hits the body hard. Great White Shark - also known as Peacemaker or White Shark - produces a powerful, indica-influenced body high quickly once consumed. However, the lingering sativa dominance of the strain prevents it from being an intense body high. Experienced smokers still recommend indulging in Great White Shark when they don't have a lot on their plate or are settled in for the evening. The strain gets its name from its lighter hues and trichome coating.

The strain has made a name for itself in elite cannabis circles since the 1990s. Great White Shark won the 1997 High Times Cannabis Cup and first place in the High Life Hemp Fair in 2005. Interestingly, Great White Shark often possesses modest THC levels. The strain's THC content tends to stay around 14 percent to 15 percent.

The high hits quickly and is also long-lasting. Its heavy high hits the user right away, making Great White Shark a popular "hit it and quit it" strain selection. However, the strain should induce a sense of euphoria, relaxation, and happiness. Great White Shark can also kick-start creativity and induce appetite.

The Lineage of Great White Shark

Great White Shark grows best indoors and with hydroponics. It takes the strain up to 68 days (nine to ten weeks) to flower. When grown indoors, Great White Shark can report high yields. However, the strain can also flourish outdoors in either hemisphere.

Where to Find Great White Shark

This strain is tough to find in the United States. Great White Shark is more common to be on the Canadian cannabis market.

Check with your local dispensary to see if they have any Great White Shark on their shelves, here!