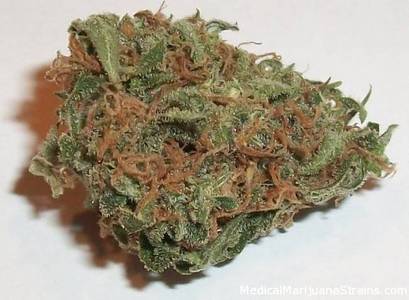 While Grapefruit Haze is not one of the most well-known strains in the cannabis industry, it should be! This citrus-packed bud is the perfect flower to smoke for both long-time users and first-time smokers. It comes from 3-time Cannabis Cup winner Super Silver Haze and zesty sativa-dominant Grapefruit strain.

Overall, Grapefruit Haze is an incredibly pleasurable smoke on every level. It tastes exactly the way it smells; a mixture of grapefruit, fruitiness, and spice. Because it is sativa dominant, 60% sativa and 40% indica, it is excellent for smoking in the daytime or before going out to a social event. Grapefruit Haze is known for being incredibly uplifting, and like other sativas, that makes it an excellent treatment for depressive tendencies, ADD, general stress, and anxiety.

Grapefruit Haze is identified by it's fluffy light green leaves and orange-red hairs. It's a smooth smoke and the high comes on very quickly. This is mainly useful for patients that smoke Grapefruit Haze to manage their pain levels. It has benefits both medically and recreationally.

The uplifting high can evoke feelings of euphoria, creativity, silliness, and it is known for boosting social activity. For these reasons, it is an excellent treatment for depression. The THC content is relatively mild, as low as 16% and high as 18%, with 0.86% CBD to counteract any anxiety effects cannabis may cause. Just as the name suggests, Grapefruit Haze tastes and smells strongly of grapefruit with a spicy little kick upon smoking.

Although Grapefruit Haze has between 16-18% THC content, it is recommended for first-time users. The THC content may seem high, but this strain is not known for causing headaches. It has 0.86% CBD which can help combat any feelings of anxiety that come from smoking cannabis.

It's also interesting to note that even though Grapefruit Haze is a sativa dominant strain, the high is uplifting without being too heady. It is known for providing a full body high as well that soothing and airy. This makes it a viable treatment for chronic pain.

No matter what is going on in your life, you are unlikely to get stuck in a negative thought spiral after using Grapefruit Haze. This strain is known for producing a uplifting high that combines a boost of energy with a soothing hit of euphoria.

Grapefruit Haze is an excellent strain for those who like to use cannabis socially. It is the perfect strain to use in the daytime or before going out to a gathering in the evening.

Like most other strains, Grapefruit Haze causes the classic marijuana side effects like dry mouth and dry eyes. Make sure you have some water and eye drops at your disposal! Some users also report strong feelings of paranoia from Grapefruit Haze, which is not uncommon for high sativa strains.

If you do feel the onset of paranoia, try using a high CBD cannabis product. This can combat the feelings of paranoia caused by the THC.

The lineage of Grapefruit Haze is pretty impressive. It comes from two popular strains, Grapefruit and Super Silver Haze.

Grapefruit is a sativa dominant plant that is known for producing a happy, stress-free high. It is most commonly used to treat migraines and depression.

Super Silver Haze is an award-winning strain that won the Cannabis Cup three times: 1997, 1998, and 1999. It's known for producing a peaceful and euphoric high. It is one of the more difficult strains to grow and it is usually a low to moderate producer. Nevertheless, it is still a nationally-known popular strain.

Similar to its lineage, Grapefruit Haze can be grown either indoors, outdoors, or in a greenhouse. If grown outdoors, it prefers a climate with a warmer fall season. Overall it prefers a humid environment, usually something like a Mediterranean climate. The buds are pretty, but overall the plants are usually not much taller than 3 feet and have low to medium yield.

Where to Find Grapefruit Haze

Grapefruit Haze is most popular in the Pacific Northwest. In can be found in the following cities:

You may also find Grapefruit Haze in Las Vegas, NV and Phoenix, AZ.