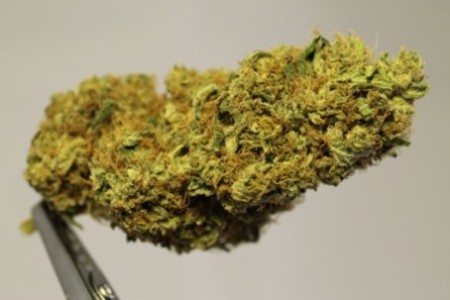 Ghost Train Haze is a perennial Cannabis Cup favorite, taking home the award for Top United States Sativa at the 2014 event in Denver. It is a heavily potent sativa strain that reaches up to 27% or 28% THC. Novice smokers or those prone to anxiety may want to pass on Ghost Train Haze, but experienced cannabis enthusiasts will enjoy its strong cerebral high and the "mind melt" which occurs in larger doses.

Ghost Train Haze has dense light green buds covered in white trichomes, and a powerful aroma of citrus and pine. Its flavor echoes the aroma, with a pungent citrus taste that includes a hint of sweetness.

Ghost Train Haze has a particularly high THC level, often reaching 27%+. This powerful sativa is a good wake-and-bake or mid-day strain, as it ignites the mind at its onset without ultimately resulting in couchlock effect.

After a few hits, Ghost Train Haze makes the user more talkative. As such, it can be a nice stimulant for good conversation at social gatherings, whether it is time to express deep thoughts or just joke around and laugh. In larger doses the "haze" genetics begin to take over, resulting in a psychedelic high that can cause the smoker to lose focus as they get lost in a sea of racing, unrelated thoughts.

Consumers prone to such feelings may think twice before using Ghost Train Haze in large doses.

Writers and artists find that Ghost Train Haze helps them focus on their creative work, without leaving them intensely drowsy when the high dies down. A few tokes can produce a high of longer than two hours, so the smoker should plan for a lengthy buzz.

Ghost Train Haze give consumers a happy, uplifted euphoric feeling while boosting creativity. This is accompanied by a buzzing body high that eases tension in the muscles, partly due to the existence of some indica strains further back in its lineage. Ghost Train Haze makes the user more talkative.

Apart from the standard dry eyes and dry mouth that accompany nearly all cannabis strains, Ghost Train Haze may increase anxiety and paranoia in some individuals.

Ghost Train Haze is the result of a cross-breed between the Ghost OG hybrid and Neville's Wreck sativa. It was originally created by Colorado breeders Rare Dankness.

Ghost Train Haze can be grown in warm outdoor climates or indoors. It typically has a flowering time of between 10 and 12 weeks.

Where to Find Ghost Train Haze

The strain is popular at dispensaries across the state of Washington and in major Canadian cities like Toronto, Montreal, Vancouver, and Calgary. It can also be found regularly in Portland, Denver, and Las Vegas.