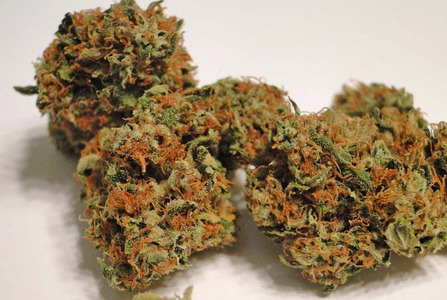 The red-headed child of OG Kush and San Fernando Valley OG Kush (known commonly as SFV OG), Fire OG is a heavy-hitting indica dominant strain. Known for a serious head rush in combination with a couch-locking body high, this is not a strain for novices. Small amounts will do. Fire OG is often classified by its "lemon-pledge" scent and red-haired buds, giving it the appearance of being in flames. In addition to boasting beautiful bag presentation and high THC levels, Fire OG is of great use to medical patients.

Fire OG is a hybrid strain that leans toward indica dominant. You'll know Fire OG on sight thanks to its vibrant red hairs, giving it the illusion of being lit (pun intended). You'll also be able to smell it from a mile away. Typically dubbed as "lemon pledge," the distinct smell of Fire OG will leak through the bag, and the notes of pine and charcoal will dominate the room when you start to break up the bud. The frosty nuggets feature super tightly packed calyxes, giving it an almost artichoke-like appearance.

As far as flavor profile is concerned, get ready for a citrus-pine combo, followed up by a little bit of a fuel-y tang at the end of your hit. The aroma and taste of Fire OG combine for a consumption experience that feels sharp and invigorating. Limonene is present in spades, and beta-caryophyllene lends a peppery kick to Fire OG's flavor.

Fire OG is a heavy hitter just like its parents. Its THC content, on average, falls between 20-25 percent. As such, this strain is not for novices. Even experienced smokers may be satisfied with just a hit or two.

The high users get from Fire OG starts out mostly cerebral, which may be a bit surprising if you're expecting a more noticeable body-feel from the indica-heavy hybrid. The head rush comes on instantly, leaving your creative juices flowing and generating a powerful euphoria. About half an hour into the session, users generally start to feel the indica, in the form of a serious body high that can leave less experienced smokers practically paralyzed. The effects typically last for around three hours, making it an average length experience.

The danger of couch lock is strong with Fire OG, so consuming this cannabis strain mindfully is paramount if users wish to remain at all functional.

The Lineage of Fire OG

The breeder Raskal created Fire OG by crossing the much-loved strain OG Kush with San Fernando Valley OG Kush in the early 2000s. At the time, an eighth of Fire OG could go for upwards of $70

Growing this plant is no easy feat and is not recommended for novice growers. Those who do produce their own Fire OG will see a high yield in 9-10 weeks. If you're hoping to grow, don't get duped with seeds; real Fire OG is sold as a clone only.

Where to Find Fire OG

Fire OG is mostly West coast strain. If you're looking to pick some up, your best bets are Los Angeles, Portland, Denver, Las Vegas, or Seattle.