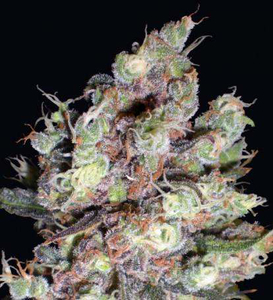 The seed bank no longer breeds the strain, but local growers keep Cotton Candy Kush clones in cultivation. The Canadian strain variety can reach up to 22% THC. This version of the strain is heavily influenced by its indica genetics. Adequately cured varieties should have a dank aroma and harsh smoke compacted into resinous and dense buds.

Delicious Seeds actively breeds a sativa-bvariety of the strain. Cotton Candy Kush is broken down as 75% sativa and 20+% indica; the strain can reach THC content in the 20th percentile. Delicious Seeds intentionally combined the sweetness of Lavender and "delicate Juniper flavors" of Power Plant, a potent South African sativa. The strain's genetic breakdown harvests a flexible and easy-going sativa-type plant. Cotton Candy Kush plants should also be relatively easy to trim.

Delicious Seeds' strain emits a powerful scent. Cotton Candy Kush plants should produce a somewhat bitter and citrus aromas, likened to grapefruit and lime. Despite the strain's overall sweet taste, there are notes of cedarwood and skunk. There are two different varieties of the strain cropping up in the cannabis world, including an indica-leaning strain from Delicious Seeds and a more strange landrace hybrid from the Great White North.

The Cotton Candy Kush variety of the strain has a more energizing and cerebral stone than the indica variety. Cotton Candy Kush's high hits quickly and is generally long-lasting. First-hand accounts did report some lucid mental stimulation, replaced rapidly by strong sedative effects. Cotton Candy Kush is a lovely accompaniment to a relaxed night in with friends.

The indica variant can create a strong feeling of couch-lock which some users find undesirable. Consumption is occasionally reported to lead to strong senses of paranoia.

The landrace Cotton Candy Kush strain is said to be a mixture of an Afghani indica and sativa Haze strain. Federation Seed Company of Vancouver Island claims credit for the creation.

When grown indoors, it takes Cotton Candy Kush seeds approximately 60 to 70 days to flower. Cotton Candy Kush can also thrive outdoors and will be ready to harvest by mid-October. The strain's indoor yield is about half of its outdoor return

Where to Find Cotton Candy