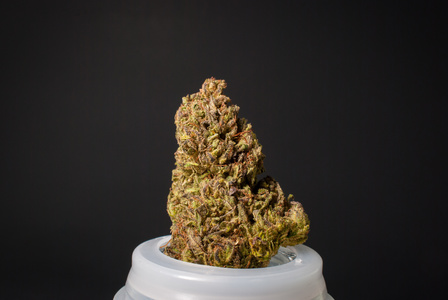 Charlotte's Web has recently become one of the most well-known CBD strains of cannabis on the market. Unlike most cannabis strains that are high in THC, Charlotte's Web has a high potency of CBD. It has roughly 0.3%THC which practically makes this a fancy strain of hemp. Hemp-derived CBD products are taking off and spreading across the nation. Charlotte's Web is the number one Hemp-Derived CBD Strain available.

Charlotte's Web was founded by the Stanley Brothers and was eventually made into a full product line of CBD Sublingual's. Charlotte's Web has been the face of helping children and adults receive the medical benefit of cannabis without breaking federal regulations!

It is safe to say that Charlotte's Web is the best strain of CBD on the market. It typically tests in laboratories less than 1% THC and around 17%-18% CBD. That is a crazy high CBD content!

This makes Charlotte's Web great for extracting pure CBD, as it is both much easier and efficient. While Charlotte's Web is a great CBD smoke with a nice pine, citrus, and earthy flavor, it is usually used to produce CBD concentrates, tinctures, and topicals.

The brand of CBD products called Charlotte's Web is an award-winning CBD product that has helped hundreds of consumers around the world. This product was a major factor in pushing industrial hemp products to the market!

Charlotte's Web is a smooth smoke that is perfect for relaxing after work, recovering from a workout, and trying to fall asleep. Even though is a CBD strain unlike any other, it is still a balance of sativa and indica effects. However, Charlotte's Web is said to be an indica-dominant hybrid, which is why it tends to have a more relaxing body sensation than anything.

Due to the THC content being so low, there are very little psycho-active effects from Charlotte's Web.

There are always a few consumers who may experience an increase in fatigue and grogginess. Since the CBD is non-psychoactive, there are also some consumers who may think they do not feel anything. That is simply due to the lack of THC in this strain.

Charlotte's Web was originally founded by the Stanley Brothers, who also produce Rick Simpson Oil. There was a young child named Charlotte Figi that was suffering from severe epilepsy, which limited her quality life and ability to just be a kid. Her family heard that the Stanley Brothers were working on breeding a strain of cannabis with no THC. When Charlotte was introduced to this strain, her constant seizures were stopped.

With the help of Charlotte Figi and her family, Stanley Brothers eventually perfected the strain and named it Charlotte's Web.

Growing Charlotte's Web is no easy task and it is tough to get seeds for this strain. However, it can be grown both indoor and outdoor and is a very resilient plant. It usually takes around 60-70 days to flower and yields around 12-16 ounces per plant. Outdoor facilities will have a more consistent yield.

Where to find Charlotte's Web

It is kind of tough to find true buds of Charlotte's Web and is usually more abundant in Canada. However, the Stanley Brothers have created a line of CBD products called Charlotte's Web. Their line of products can be sold nationwide and purchased online.

Check with your local dispensary to see if they have any Charlotte's Web on hand!