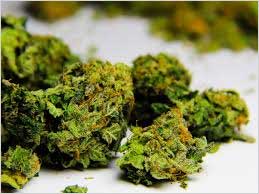 Bubba Fett is the cream of the crop when it comes to indica-dominant hybrids. Its rare and unique cross alone attracts cannabis connoisseurs to this flower. Bubba Fett is known for providing consumers with a hefty high which quickly becomes sedating. It is an ideal strain for kicking back and taking a mid-day nap. Some consumers find the strain to be a fantastic movie strain as long as the sedating effects don't become overpowering. Bubba Fett is an insanely high testing strain which makes it a perfect flower for experienced consumers.

Bubba Fett is an uncommon strain for consumers to come across. Those who have had the opportunity to smoke down on Bubba Fett respect this strain for its intense body high and celebrity heritage. Bubba Fett is known for knocking out even the most experienced consumers. It has an average THC content of around 25 percent to 29 percent THC. Due to its powerful sedating effects, Bubba Fett is particularly popular amongst medical marijuana patients.

Its variety of therapeutic applications makes it an excellent strain for a multitude of different consumers. While puffing down on Bubba Fett consumers describe its flavor as being earthy, herbal, and berry-like. What consumers enjoy about smoking Bubba Fett, is its taste is apparent throughout the entire session.

Consumers find Bubba Fett to be best suited for a nighttime smoke session. Its effects are overall extremely sedating; however, the initial high is a great mood booster and creates a sense of happiness. Bubba Fett is also said to cause cabinet-clearing munchies in many consumers.

First-time smokers may not enjoy the powerful high associated with Bubba Fett. Nevertheless, this strain is gaining quite the following for its classic flavor and couch-locking high!

The Lineage of Bubba Fett

The classic lineage of Bubba Fett is a cross between the famous Pre-98 Bubba Kush and the renowned Stardawg. These strains combined to create an original indica hybrid which meets the quality standards of even the pickiest of cannabis lovers.

Bubba Fett is a moderately tricky strain to grow. First off, it is tough for cultivators even to find a seed or clone of this strain. Those who have had the opportunity to grow Bubba Fett report the strain having a quick flowering time and mild yield. Even though it has a mediocre return, the quality of the buds is first-class. Bubba Fett is usually grown indoors and only grows to about 50 inches tall. It is no surprise many cultivators would love to have some Bubba Fett in their rotation.

Where to Find Bubba Fett

Bubba Fett is a rare strain on the marijuana market. It does not have the best yield and is not a favorite in the commercial realm. Bubba Fett is most common in Colorado but may pop up in other legal markets from time to time.

Check to see if your local dispensary has any Bubba Fett on their shelves, here!