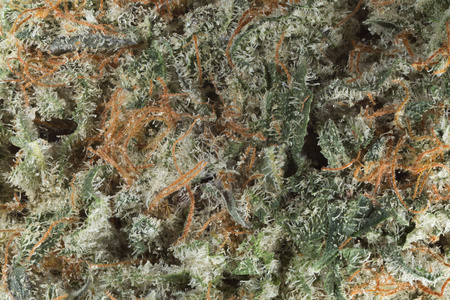 Blackberry Kush is a beloved strain amongst indica fans looking for a powerful body high. The strain is a mix between two heavy-handed indica strains. Blackberry Kush honors its name with its sweet, berry smoke and blueberry flavor. Though there's no consensus on the origin of this strain, Blackberry Kush is known among the cannabis community as a valuable cash-crop, prompting its spread and popularity.

Blackberry Kush is used in many different marijuana products throughout the industry such as edibles and concentrates. Blackberry Kush is perfect for any extraction because of its trichrome rich buds and mouth-watering flavors!

The high THC content influences an intense body high that can result in infamous couch-locked effects. Other effects of smoking Blackberry Kush include euphoria, happiness, relaxation, creativity, sleepiness, and sedation.

Blackberry Kush is a perfect strain for relaxing after work, recovering from a work-out, getting a few chores done, or even taking a nap!

Due to the heavy indica-dominant traits of Blackberry Kush, there are a few consumers who describe experiencing fatigue, grogginess, or paranoia. Blackberry Kush is an afternoon smoke, inspiring drowsiness if consumed in the morning.

The exact parent strains of Blackberry Kush are currently up for debate. The consensus is that Blackberry Kush is the child of Afghani and Blackberry. The notes of deep purple and blue throughout the dense, crystallized nugs make its indica heritage clear. Many cannabis connoisseurs theorize that Blackberry Kush gets its hints of sweet, berry flavor from the Blackberry strain while its Afghani heritage contributes to the strain's tendency for an almost sedative sense of relaxation and harsher, diesel smoke.

Other whispers credit DJ Short Blueberry, the West Coast's personalized version of the Blueberry strain, and Bubba Kush as ancestor strains. Blackberry Kush's mysterious nature doesn't stop any users from trying it, though.

The strain is said to be easy and profitable to grow both indoors and outdoors. For beginner growers looking to cultivate a cash crop, it is recommended to grow Blueberry Kush seeds indoors. The strain is considered relatively easy to grow and regularly produces higher yields.

When grown indoors, growers can expect near 450 grams per square meter from Blueberry Kush plants. The strain can produce impressive plants and yields when cultivated outside by experienced growers. Some have claimed that they can produce approximately two pounds per plant.

The strain naturally resists molds and mildews but can be plagued by botrytis, a necrotrophic fungus, and spider mites. Blackberry Kush plants are not often topped, and it is suggested to adopt aggressive lateral branching techniques for best flowering results. When grown indoors, it takes Blackberry Kush about 65 to 75 days to flower. If grown outdoors, it makes the strain a slightly shorter time period of 60 to 65 day to bloom.

Where to Find Blackberry Kush

Blackberry Kush is most popular in states like Washington, Oregon, and California.

Check to see if your local dispensary has some Blackberry Kush on their shelves, here!