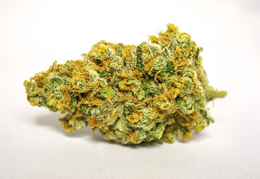 Area 51 is an evenly balanced sativa-indica hybrid that combines an uplifting yet focused head high with a relaxed body high, making it a perfect anytime strain for cannabis enthusiasts. Much like the top-secret United States government facility the strain is named after, there is not an abundance of information about the Area 51 strain.

Buds of Area 51 are cone shaped, with an olive green hue and hairs that fall somewhere between bright orange and amber. The flower has a sweet citrus and floral aroma with some earthiness, and its flavor has similar characteristics. The lemony taste adds another positive element to Area 51's appeal. Overall, it's a smooth smoke that leads to a high that covers all the bases for Mary Jane lovers.

Consuming Area 51, it is common to experience a rush of euphoria with a burst of motivation.

Area 51 pairs well with creative work, allowing the smoker to become relaxed and focused on the task at hand without an overwhelming onset of couch lock that would deter sativa consumers away from this strain. It's a good strain for social engagement, as it makes the user talkative and lively while (in most cases) not becoming too racy or causing anxiety.

Area 51 has a potency of 20% to 23% THC, making it a major strain with minimal side effects. Side effects include dry mouth and red eyes.

Much like the murky, clandestine world and high-level government conspiracy, Area 51 is known its secrecy, revealing very little regarding its genetic information. There are unconfirmed rumors that it is the result of a cross between Cannatonic x Alien Abduction, two hybrids themselves, but the lack of consensus on this suggests that we still have a lot to learn about the secretive Area 51.

What we do know is this hybrid strain delivers the best of both worlds to recreational cannabis consumers; a combination of typical sativa and indica effects that don't lean too heavily on either.

Growing Area 51 is known to be tricky, and should be best left to more experienced cultivators. A full-grown Area 51 should grow between 40"-70" in height, with bushy, yet compact limbs. Area 51 should be the flowering stage between eight (8) and ten (10) weeks after planting. Commonly, growers of Area 51 receive a yield of two to four ounces per square foot.

Where To Find Area 51

Area 51 is popular throughout the state of California, when it can be found. It is also periodically available in Oregon, Colorado, Washington, Arizona, Massachusetts, and New York. Smokers looking for a strain they can enjoy at any time of day should look out for Area 51 when and if it becomes more obtainable.