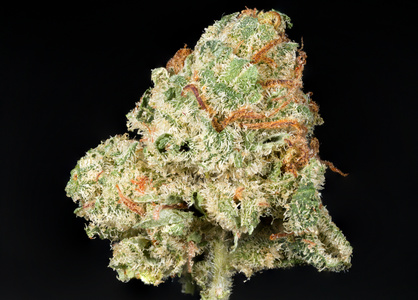 Alien Dawg is a well-known strain. Its parents, Chemdawg and Alien Technology come from Northern California and Afghanistan heritage respectively. Heavy on the indica side, this powerful strain is said to be brought to the US by an American soldier. No matter how it came to the US, it definitely made it's way up the popularity list. Alien Dawg's characteristics affect both the mind and the body.

Alien Dawg is known for its sedative effects as a result being 70% indica dominant. Its THC content reaches 20% with a CBD content of less than 1%. Bred by Cali Connection, this dense strain is pale green with yellow hues from its crystals. Alien Dawg is said to be one of today's most powerful strain and not for beginners.

Tasting Alien Dawg reminds you of the natural scent of earth and pine like Alien Technology adding a sharp and bitter aftertaste from Chemdawg. The aroma has an earthy scent with hints of pine and sometimes berries. The scent is pungent as well.

Alien Dawg's high starts cerebral. A fuzzy feeling is felt so make sure you don't have anything important planned. Once your head feels light, the effects of the strain begins to radiate through your body allowing it to become a little heavy, but not too much. You will feel euphoric, uplifted, and sedated. It does have some sativa characteristics like the want to be creative, but it will not dominate the lack of focus the indica provides.

Some adverse effects include dry mouth, dry eyes, and dizziness. With high dosages, headaches and paranoia could be effects as well.

Alien Technology is a heavy indica strain which THC content reaching up to 20%. The Afghani landrace strain is pretty rare and its journey remains an enigma. There is really not too much information about this strain. Its bud is light green in color with dark patches all over and covered with brown and orange hairs. It is dense on the inside but fluffy on the surface.

The yield amount for both indoor and outdoor growing are unknown but like many strains, indoor growing takes 8-9 weeks. Growing outdoors, flowers must be harvested by late September.

Chemdawg is a popular and vintage strain originating from the combination of the Nepalese and Thai strain, though has yet to be proven. This 55% sativa hybrid has a THC content that reaches to 26% with less than .1% CBD. It is a fluffy green bud with specks of dark green leaves. The flower is covered in frosty crystals and scattered pale brown hairs.

Growing Chemdawg needs an expert's touch. It can be grown both indoors and outdoors with the plants growing tall. The plant needs to be in warm, dry, Mediterranean summer climate.

Flowering indoors takes 9 weeks yielding 28oz per square meter. Outdoor plants need to be harvested in September and will yield 28oz per plant. Be aware that this plant is prone to molds and mildew.

Alien Dawg is easy to grow. It can be done both indoors and outdoors with plants growing up to 6 feet. While growing time is known, yield and climate conditions are not. Flowering indoors takes 58-68 days. Plants grown outdoors need to be harvested in early October. With outdoor growing, it is estimated that the average yield would be close to Chemdawg.

Where to Find Alien Dawg