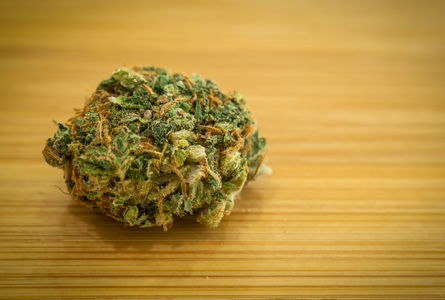 ACDC, a phenotype of Cannatonic, is a balanced hybrid strain containing large amounts of CBD and little to no THC. ACDC, when grown correctly, expresses a 20:1 CBD to THC ratio, and because of this typically low level of THC, the strain produces almost no cerebral effect. ACDC usually tests between 16-24 percent CBD, making it an excellent choice for people who want to try it without feeling too high. In fact, THC can test as low .2%, which legally classifies the strain as hemp.

Although ACDC may conjure up memories from a rebellious youth, this cannabis strain isn't nearly as electrifying as it sounds. Earning its name by testing at 22:1 CBD to THC, ACDC, a sativa-dominant hybrid, is not truly a 'strain' at all. Instead, it is a phenotype of the strain Cannatonic, which produces a wide range of cannabinoid levels. In fact, only about 50 percent of Cannatonic plants develop the high-CBD producing characteristics of ACDC.

Popular in California, and rapidly gaining ground in other markets as well, this strain won many cannabis awards for its extraordinarily high levels of cannabidiol, CBD. Due to this high level of cannabinoid expression, ACDC is often used to make CBD products such as tinctures and concentrates.

With a typical cannabinoid ratio of 20:1, CBD to THC, this strain produces virtually no psychoactive effects.

With a significant lack of THC, ACDC is unlikely to make any waves in the recreational cannabis market as it doesn't produce any psychoactive effects. On the other hand, CBD does create a robust body effect as it relaxes muscles, quiets nerves, and helps release tension and stress.

ACDC may not provide an altered state like other strains of cannabis, but for an overall improved sense of wellness, then this may be a perfect strain. ACDC is calming without sedation. Many patients may find the symptom relief and mental clarity of ACDC the ideal choice for daytime use.

As with most cannabis strains, smoking ACDC can produce dry mouth and dry eyes. Those new to cannabis may experience slight dizziness, however, because of the high CBD content and low THC content there are rarely any other side effects reported with this strain.

Bred initially by the Spanish seed bank, Resin Seeds, this plant produces a pungent, sweet odor with skunky undertones. As mentioned, ACDC isn't an actual strain; rather, it is an expression of cannabinoids within Cannatonic, a 50/50 indica/sativa hybrid. Only about half of Cannatonic seeds will produce the high 20:1 CBD to THC cannabinoid ratio and earn the ACDC nickname.

ACDC produces dense nugs which are dark green with orange pistils. Most report the flavor is earthy, resembling a pine or oak flavor with a slight hint of a sweet, skunkiness.

The only way to guarantee the ACDC phenotype of Cannatonic is to raise it from a clone. They are quick to root, but veg is slow. These plants prefer lower nutrient levels during the vegetative stage, so if you're running a hydro grow, make sure to cut the nutrients back to about half strength. During the flowering stage, she can handle full force. Harvest comes after 9 or 10 weeks

Your trichomes will be milky, but she will be ready. You can expect to harvest up to 2 ounces per plant. ACDC also does better indoors than outdoors, even though she grows like a sativa, so keep your space allotment in mind.

Where to Find ACDC