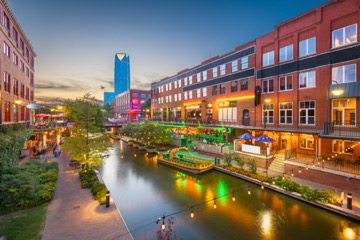 As one of the newest states to allow the medicinal use of marijuana, Oklahoma has joined the overwhelming majority of U.S. states that permit recreational or medical marijuana use, with only Idaho, South Dakota, and Nebraska prohibiting the use of cannabis and cannabis-based products.

Oklahoma's marijuana laws all started almost 90 years ago when, in 1933, cannabis was banned across the state. And it wasn't until 2015 when then-Governor Mary Fallin signed into law a pilot program allowing CBD to be used to treat children with epilepsy. The bill, also known as "Katie and Cayman's Law," allowed the sale of CBD oil with less than 0.3% THC and was the first step towards medical marijuana legalization following a failed attempt to get medical marijuana on the ballot in 2014.

On June 26, 2018, voters approved State Question 788 during the primary election, which legalized medical marijuana and set up regulatory oversight for the sale and licensing of medical marijuana in the state.

Note that the recreational use of marijuana is still forbidden in the state of Oklahoma.

Learn more about marijuana in Oklahoma

Yes, the passing of State Question 788 allows an individual with a state-sanctioned medical marijuana license to possess and consume marijuana in all places that allow the smoking of tobacco products.

The new law, which was the culmination of an effort that began in 2016 after a protracted court battle pushed the vote back two years, passed 57 percent to 43 percent and made Oklahoma the 30th state to legalize medical marijuana.

Is weed legal in Oklahoma for recreational use?▼▲

No, recreational marijuana use and possession is expressly forbidden by federal and state law.

Is CBD legal in Oklahoma?▼▲

Sort of, but not really.

In 2015, CBD was legalized by then-Governor Mary Fallin for the treatment of children suffering from epileptic seizures, though she made clear her opposition to medical marijuana at the time and again during the 2018 State Question 788 vote.

Since then, CBD has become widely available throughout the state, though there is no law specifically allowing CBD to be consumed for recreational purposes.

Where are the dispensaries located in Oklahoma?▼▲

As of March, 2019, the state has awarded over 1,000 medical marijuana dispensary licenses to the burgeoning Oklahoma marijuana industry, but not every location has been opened to the public just yet. The first dispensaries welcomed patients in December of 2018, six months after State Question 788 was passed by voters, and more continue to open with each passing month.

Most dispensaries are located in the major metro areas of Tulsa, Oklahoma City, and Moore, and a list of all marijuana dispensaries can be found on omma.ok.gov(pdf).

Are the Oklahoma dispensaries recreational or medical?▼▲

Adults and minors alike may apply for a medical marijuana license through the Oklahoma Medical Marijuana Authority (OMMA). While adults may obtain a medical marijuana card with a recommendation from one doctor, those under 18 need the signatures of two physicians, as well as the permission of a parent or legal guardian.

As federal law still prohibits the growth, transportation, sale and consumption of marijuana, most banks and financial services companies choose not to deal directly with marijuana businesses. That means cash is still king at almost all medical marijuana dispensaries in the state. However, most dispensaries have an ATM or two on site, so you don't necessarily need to run by the bank before visiting the dispensary.

To be clear, no one is legally allowed to grow marijuana for recreational use or consumption in the state of Oklahoma, and you can be punished by state and federal law for growing and transporting marijuana without a valid medical marijuana card or marijuana business license.

Can you go into a dispensary when you're under 21 in Oklahoma?▼▲

If you're over the age of 18, you can apply for a medical marijuana card with a physician's signature and recommendation. Minors under the age of 18 need two physicians' signatures and the approval of a parent or legal guardian.

How old do you have to be to purchase marijuana in Oklahoma?▼▲

There is no age restriction to purchase marijuana in Oklahoma provided you have a valid medical marijuana card. Both minors and adults can apply on the Oklahoma Medical Marijuana Authority's website at omma.ok.gov.

Note that minors under the age of 18 need the permission of a parent or legal guardian, as well as the recommendation of two different doctors.

Do you need a medical card to buy from a dispensary in Oklahoma?▼▲

Do you need a medical card to enter a dispensary in Oklahoma?▼▲

Yes, all persons entering a medical marijuana dispensary in the state of Oklahoma must have a valid medical marijuana card. Cards can be applied for online at omma.ok.gov, cost $100, and must be renewed every two years.

According to Oklahoma weed laws, medical marijuana cardholders can possess up to three ounces of flower marijuana, one ounce of concentrated marijuana and 72 ounces of edible marijuana. The law also allows individuals to store up to eight ounces of marijuana and to grow 12 marijuana plants -- with only six flowering or budding plants at any time -- in their homes.

Unlike most cross-state medical marijuana laws, any individual who legally possesses a medical marijuana license from another state may obtain a temporary license in Oklahoma through the Oklahoma Medical Marijuana Authority at omma.ok.govfor an application fee of $100.

Without an Oklahoma medical marijuana card, you are not allowed to possess or consume marijuana under any circumstances. However, if you can offer evidence of a qualifying medical condition, you may only face misdemeanor charges and fine of up to $400 if caught with less than an ounce and a half of marijuana.

According to Oklahoma marijuana laws, those with a medical marijuana license can only consume marijuana in a private area like a residence. Medical marijuana cannot be consumed in any public areas like parks, sidewalks, or restaurants.

Oklahoma weed laws allow medical marijuana cardholders and their caregivers the ability to grow up to 12 marijuana plants, with no more than six flowering or budding plants at any one time. Keep in mind that the per-person limits are the same as the household limits, so any household cannot grow more than 12 plants, with six flowering, as well.

Only medical marijuana patients may cultivate marijuana in the state of Oklahoma and may grow up to 12 plants in their home -- which is also the household limit -- with a maximum of six plants budding at any time.

Medical marijuana card-carrying patients or their caregivers may travel with up to three ounces of marijuana at any given time.

As recreational marijuana is not allowed in Oklahoma, the legal limit for non-cardholders is zero, though if an individual can offer evidence of a qualifying medical condition and is caught with less than 1.5 ounces of marijuana, they may only face misdemeanor charges and a fine up to $400.

Is Marijuana delivery legal in Oklahoma?▼▲

Oklahoma medical marijuana laws have not weighed in specifically on the issue of medical marijuana delivery. However, State Question 788 does allow medical marijuana retailers a transportation license that could eventually be used for delivery purposes. So, if the Oklahoma Department of Health limits the number of marijuana dispensaries in a given area or statewide, some have estimated that delivery may be allowed in order to help serve larger geographical areas and close the gap.

Marijuana and Driving in Oklahoma▼▲

With all the dispensaries out there, it's hard to know where to start. Here at Leafbuyer, we try to make it as pain-free as possible by providing ratings and listing the services available at each dispensary. We can even help you find a 420-friendly doctor. So whether you're looking for medical dispensaries in Tulsa, Oklahoma City, or anywhere else in the state, we can help. We also have a great map view to easily see who's closest to you, or just click below for the closest major city to you:

These Oklahoma favorite dispensaries feature Leafbuyer deals that you won't want to miss!

For the best Oklahoma weed deals, keep it right here on Leafbuyer.com. We're your one-stop shop to find a dispensary, weed-friendly doctor or the best deals in flower, concentrates, cartridges, edibles, tinctures, topicals and seeds and clones. You can even shop by strain, so whether you're looking for Purple Dawg, Skittles, Longs Peak Blue, Markle Sparkle or California Dream, you can find it all on Leafbuyer. And if you need marijuana storage containers to keep your fresh herb fresh or marijuana growing supplies to try your hand at growing marijuana at home, we have that, too. Or, if you want to jump straight to our deals, check out these links: 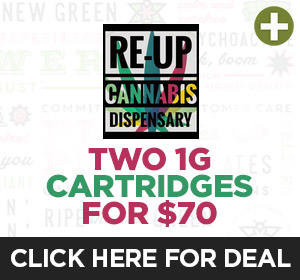