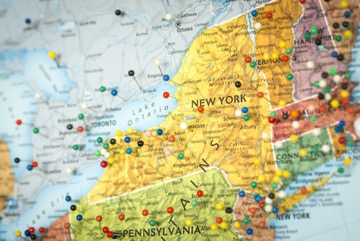 New York State first prohibited the purchase of marijuana without a valid prescription in 1914. One hundred years later, the state passed its most extensive overhaul of New York marijuana laws only to come full circle -- pot would again require a prescription to purchase. So goes the story of marijuana laws in New York State. From 1914 to 1927, the state of New York had what you could call one of the country's first medical marijuana markets, but, like Massachusetts, which had also enacted a ban on "Indian hemp," the first U.S. state to do so, drug laws of the early 1900s were primarily a response to trade pressures and latent racism against the drug's largely Mexican user base, who had begun to immigrate into the U.S. in record numbers starting at the beginning of the twentieth century.

In 1927, New York State banned cannabis outright, along with Idaho, Kansas, Montana and Nebraska that year. A decade later, in 1937, the Marihuana Tax Act banned marijuana nationwide on a technicality: all cannabis sales were to be taxed, but the stamps used to pay the tax made it illegal to possess marijuana but not the stamps, which would very quickly earn anyone attempting to buy the tax stamps a visit from local authorities.

While the Marihuana Tax Act still allowed the medicinal use of cannabis under increasingly restrictive regulations, Congress did away with all medical marijuana, and any other marijuana use, with the Controlled Substances act of 1970, which prohibited the drug nationwide.

Back in New York, marijuana laws would shortly become the nation's toughest yet.

On May 8, 1973, New York Governor Nelson Rockefeller signed a bill that increased penalties for the possession and sale of marijuana and other drugs following sweeping anxieties against issues raised by the counterculture movement of the 1960s. The new law, which could earn a minimum of 15 years and a maximum of life in prison for the sale of just two ounces and the possession of just four ounces of marijuana, gave New York State the most punitive drug laws in the country. 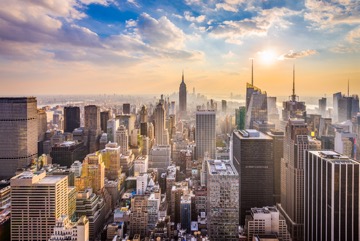 Just four years later, New York walked back the so-called Rockefeller drug laws, seen as unnecessarily harsh and politically motivated by critics, by decriminalizing possession of less than 25 grams of marijuana -- almost an ounce -- to a $100 fine in 1977. Unfortunately, though, marijuana possession would remain a criminal misdemeanor, not a civil infraction, which led to the arrest of over half a million people between 1997 and 2010; 80 percent of arrests were of black and Latino individuals, a far cry from a fair and equal distribution of the drug's users.

In 2014, New York medical marijuana laws were up for an overhaul as state lawmakers passed a bill that gave the state's Department of Health 18 months to develop a medical marijuana program, making New York the 23rd state in the country to legalize the use of marijuana for the treatment of debilitating diseases and conditions.

Just last year, Governor Cuomo argued in his 2018 State of the State address for an investigation into the effects of recreational legalization. In its report, the Department of Health cited various benefits -- including economic, health and public safety benefits -- leading Cuomo to declare recreational legalization a top priority of the 2019 legislative session. Critics, however, accuse Cuomo of using marijuana for political capital and point to his recent abandonment of recreational-use marijuana following a tough budget battle that saw marijuana legalization swept under the rug of politics and bureaucracy.

Is marijuana legal in New York for medicinal purposes?▼▲

Unlike the states of California or Colorado where voter referendum ordered the creation of a medical or recreational market, the New York medical program was written and passed by the New York State Assembly. In writing these rules, the state purposely closed the system to outsiders, and, critics say, restricted the value of the program.

Is weed legal in New York for recreational use?▼▲

No, New York only allows card-carrying members of its medical marijuana program to purchase and consume marijuana.

However, the recreational use of CBD with less than 0.3 percent of THC is allowed in the state.

In New York City, police have started issuing tickets to persons caught possessing or using marijuana in public instead of arresting them. A first offense or possession of a small amount of cannabis usually means a fine of just $100, and are classified as civil infractions, like a traffic violation.

Where are the dispensaries located in New York?▼▲

Marijuana dispensaries in New York are licensed based on geographic need to ensure that cardholders are able to reasonably obtain medical marijuana products with minimal travel.

While New York's medical marijuana law originally licensed five growers and four dispensaries each, the state now allows 10 companies to operate 40 dispensaries in the state, five of which are coming soon.

Are the New York dispensaries recreational or medical?▼▲

Currently, the New York legislature has approved only medical dispensaries to operate and sell marijuana in the state.

Dispensing centers around the state take payment in cash, a financial holdover from the continued illegal federal designation. U.S. senators are currently working to reconcile the situation, but for now medical marijuana patients will have to use an ATM on site or bring cash to their local dispensary.

New Yorkers are not allowed to grow any amount of marijuana in the state, including for medical purposes. According to New York marijuana laws, all cultivation in the state is managed by 10 providers, which run four medical marijuana dispensaries each.

Medical marijuana cardholders are eligible to purchase no more than a 30-day supply of approved marijuana products. The certifying medical professional is responsible for defining the volume of medication necessary to adequately address an individual's symptoms during any 30-day period.

Anyone caught in possession of marijuana who is not a New York medical marijuana cardholder is subject to fines between $100-$250, depending on past offenses.

Can you go into a dispensary when you're under 21 in New York?▼▲

Yes, but only if you are a medical marijuana cardholder registered with the state.

How old do you have to be to purchase marijuana in New York?▼▲

While there are no age restrictions for the state's medical marijuana program, minors must have a parent or legal guardian designated as their caregiver before they can purchase marijuana from a state-licensed dispensary, according to New York medical marijuana laws.

Do you need a medical card to buy from a dispensary in New York?▼▲

Do you need a medical card to enter a dispensary in New York?▼▲

Yes, under NY weed laws, you must possess a valid medical marijuana card to enter and purchase from a dispensary in New York State.

It is not legal to possess any amount of marijuana for recreational use in New York.

However, marijuana possession and use has been decriminalized in the state, which, for most people, means a $100 fine for 25 grams or less for a first infraction.

For medical cardholders, the possession limit is defined by their doctor, and dispensaries are not allowed to sell more than a 30-day supply to patients.

Furthermore, cardholders are prohibited from vaporizing (but not eating or drinking) marijuana products anywhere that may be defined as public. Here is a list of where a registered cardholder currently cannot vaporize:

The consumption of any marijuana product while in a motor vehicle is also prohibited, even if the vehicle is on private roads, including in any parking lot.

Additionally, the state prohibits consumption at any medical marijuana manufacturing or dispensing center.

All marijuana grown in New York State is cultivated by one of 10 licensed cultivators, which are allowed to run up to four dispensaries each.

According to New York marijuana laws, no medical or recreational cultivation is allowed in the state.

Misdemeanor charges, one year in jail and up to $1,000 in fines awaits any grower caught under current New York weed laws.

The state of New York allows the transportation of marijuana by registered organizations, cardholders, and caregivers under certain conditions.

But while a cardholder or their caregiver may safely and legally transport approved quantities of cannabis within the state, federal drug trafficking laws remain in place for anyone who brings medical products across state lines, including to other legal states, an action which is punishable by a minimum of fifteen years in prison and up to $100,000 in fines.

In late 2016, the New York Department of Health recommended legislation that would provide better cardholder access through direct-to-cardholder delivery. That said, legal delivery is only possible through a licensed medical dispensary in the state, according to New York marijuana laws.

Marijuana and Driving in New York▼▲

Driving while under the influence of marijuana remains a misdemeanor offense in New York, punishable by fines up to $1,000, up to a year in jail, and a six-month suspension of your driver's license.

If you're looking for dispensaries in New York State, Leafbuyer has your back. Our handy search engine lets you filter by location type, rating, and whether they're open now, so you can be sure to find the best dispensary near your home, work, or favorite hangout. Just use the list below or jump right into our interactive map.

Click the map to explore dispensaries in New York.

For the best New York weed deals, keep it right here on Leafbuyer. Whether you're looking for weed deals in Buffalo or weed deals in Albany or elsewhere in the state, or even if you're just trying to track down the best weed strain (like Purple Dawg, Skittles, Long Peak Blue, Markle Sparkle, or California Dream). Leafbuyer makes it easy to shop for weed in NY. We can even help you find marijuana growing supplies and marijuana storage containers if you'd like to give at-home cultivation a try. Or just click on the promotions below for our favorite New York weed deals.