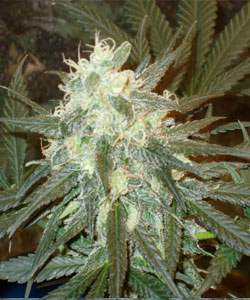 White Ice is a rare indica-dominant hybrid with a classic lineage. This strain is a favorite amongst both consumers and patients for a multitude of reasons. First off, it has a unique flavor and aroma unlike most strains and is full of trichomes. White Ice does have some sativa-like effects even though it is undoubtedly an indica-dominant. This strain is perfect for a rainy day spent watching movies or playing video games.

White Ice is said to be a fantastic indica-dominant hybrid. It has a high THC content that adds to the overall quality of the strain. White Ice usually tests around 18 percent to 22 percent THC. Its powerful body high makes for some severe couch-lock. Many consumers have not had the opportunity to smoke White Ice, but it is known for having a distinctly sweet smell.

It is also famous for having thick white trichomes which are great for making concentrates. White Ice is a well-sought-after strain by many cannabis connoisseurs.

The usual effects of White Ice are euphoric, relaxing, and happy. The beginning of its effects is uplifting making it a great mood enhancer. As the cannabinoids sink in, White Ice becomes exceptionally sedating.

The Lineage of White Ice

White Ice has a classic lineage that is partially what makes this such a rare strain. White Ice is a cross between Afghan Hash Plant, Northern Lights, and Dutch Skunk. The combination of these first-class parents is what makes White Ice such a desired strain.

White Ice is not an easy strain to grow. Even though it has a shorter flowering phase than most strains, it still takes around 55-65 days. Its stays relatively short and typically does not get higher than 50 inches. White Ice does produce some fantastic buds, but its yield is not always the best. This strain is a great one for novice cultivators to master if they can ever get their hands on it.

Where to Find White Ice

White Ice is tough to find in most markets. California, Oregon, Nevada, and Arizona are the most common states with White Ice.

Visit our dispensary locator to locate White Ice near you!