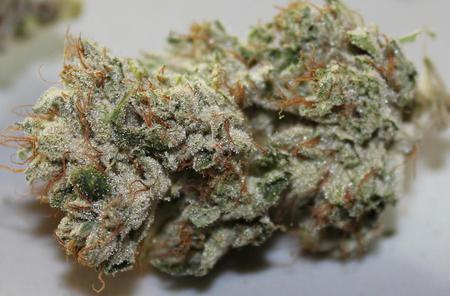 White Fire OG is a sativa-dominant hybrid that was originally bred from The White and Fire OG. It provides a clear and creative high with an earthy, sweet flavor and aroma profile.

White Fire OG, also known as WiFi OG, is a sativa-dominant hybrid strain known for its pungent aroma and comfortable, cerebrally-focused effects. It is 60 percent sativa and 40 percent indica, making it a popular strain for both medical patients and recreational users.

With an average THC content of 25-28 percent, it is sure to have a profound effect on even heavy users. Beginners should tread lightly. The effects of this hybrid are relatively long-lasting, which makes this an ideal strain for those who need to heavily medicate.

White Fire OG provides users with stimulating and energetic cerebral effects, which makes it an ideal morning and daytime strain. Relief is felt almost immediately, and it doesn't lead to laziness and/or sleepiness in most cases, allowing users to maintain their productivity throughout the day.

Nowadays, White Fire OG is known to be one of the finest medical marijuana strains on the market.

Flavor, Aroma, and Appearance White Fire OG's flavor is unique. This hybrid strain has an earthy, pine, and sweet aroma, and the flavor is similar. Many users report White Fire OG as tasting sweet, piney, and peppery. Both the aroma and flavor have earthy and pine aspects, owing to the strain's terpenes, which include pinene, myrcene, and humulene.

This strain's appearance is a varying shade of green with wild orange and brown hairs growing out of it accompanied by layers of crystal trichomes.

Some of the most common effects of this strain include feelings of relaxation/calmness, creativity, happiness/upliftment, increased energy, and/or hunger. Overall, users feel strong cerebral effects with increased amounts of creativity, energy, and focus.

Potential negative side effects include dry mouth, dry eyes, and possible paranoia, dizziness, and/or headaches if too much is consumed at once or if an individual isn't familiar with high amounts of THC.

This potent hybrid is a cross between Fire OG and The White.

Growing White Fire OG is moderately difficult. It typically grows between 30-78 inches in height with an average yield of 3-6 ounces per square foot of plants. This hybrid flowers between 7-9 weeks on average, and it can be grown indoors or outdoors, but it grows best in a controlled environment with warm temperatures.

Where to Find White Fire OG

White Fire OG is very popular in California, Oregon, Washington, Colorado, and Michigan. However, this powerful hybrid is increasing in popularity in grow rooms throughout the U.S.