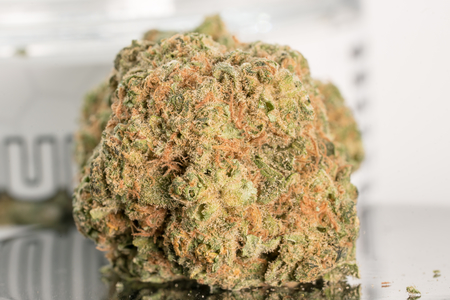 Romulan is a powerful indica known for its intense therapeutic qualities. Its sci-fi themed name is a direct indicator of its potency: Romulan will make you feel like you’re floating through space. Though mostly indica, Romulan growers say sativa genetics have crept in over time, lending it intense cerebral effects in addition to the full-body relaxation. Luckily, this popular strain is available in nearly every legal cannabis market - so anyone searching for its impressive properties shouldn't have to look far.

Romulan is notable for being almost a pure indica, with some varieties exhibiting greater hybridization and a larger proportion of sativa genetics. Romulan buds should grow to a jade green color and a spicy, pine-like smell. The strain's nugs should be dense and covered with a layer of frosty resin. When smoked, Romulan bud should produce an earthy, woodsy flavor and a pungent scent. The strain's jar appeal and mild, but rich aroma makes it appealing to a wide variety of consumers.

This cannabis strain is an homage to the Romulan alien race in Star Trek. The story goes that the strain is strong enough to "dent your head" and leave ridges. Other accredited the species' strength and emotional manipulation as inspirational factors for the strain's name.

Either way, Romulan often produces a stone strong enough to let your high live long and prosper. When smoked, Romulan cultivates an intensely relaxing body high. First-hand experiences also suggest that the strain's high can layer you with a blanket of joy to uplift your mood. The indica-heavy strain can also tire the user and induce sleep. Overall, Romulan packs a powerful, indica-intensive stone that is not for the faint of lungs.

If you're not ready to go toe-to-toe with serious couchlock, Romulan may not be the strain for you. Consume too much, and you may find yourself unable to move. This becomes even more of an issue when cottonmouth sets in and you can't bring yourself to grab a beverage.

The Lineage of Romulan

The indica dominant hybrid strain we know now was specifically backcrossed seven times by the Canadian seed bank, Federation Seed Company. The seed bank bought the completed mystery strain in the 1990s in an attempt to breed Romulan clones from extinction. The female product was then crossed with White Rhino and back-crossed until only 3 percent of White Rhino remained.

Growers beware: Romulan can be quite difficult for novices to grow and is a touchy strain for beginners to grow. When grown successfully, plants can reach up to six feet in height. It generally takes the strain eight weeks to flower and be ready for harvest indoors; when grown outdoors, the strain will be ready around mid-October. Romulan plants have been known to produce more than one ounce per plant, making them an excellent choice for growers trying to get the highest yields.

Where to Find Romulan

Romulan is especially popular in British Columbia and the Pacific Northwest. Due to the strain's legendary potency, it has spread down the coast and into states as far inland as Colorado and Michigan.