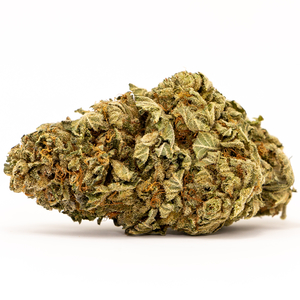 There's a reason that this strain is famous across the nation. Bubba Kush is a heavy-handed indica-dominant hybrid favored for its sedative and relaxing effects, known for its effectiveness in herbal healing. Despite the strain's murky genetic history, medical and recreational patients recognize Bubba Kush by its bright purple, red, and blue coloring and dank, potent smell, and continue to use the cannabis strain based on its effects. This intense strain gives users the pleasure of delicious taste and an immersive high.

The one, the only: Bubba Kush. This hybrid indica strain is famous for its earthy yet sweet flavor and heavy, tranquilizing body high. On average, Bubba Kush is around 18% THC. Cannabis researchers and experts find Bubba Kush varieties can reach 27% THC. CBD portions only reach 0.1%.

When smoked, Bubba Kush tastes both earthy and sweet. The smoke emits a piney aroma that is well-mixed with hash and spice. The smoke can be fairly harsh and induce coughing due to its dank taste.

The strain's legend is backed by mysterious parentage. Largely, the consensus is that the strain has mostly indica heritage from Afghan and American roots. Plan to smoke Bubba Kush later in the day to unwind with and chill. The strain is known to induce the munchies and sleep and has a packed, dense structure. The strain also smells powerfully when smoked.

The strain has claimed fame in flower and edible forms in recent Cannabis Cups. From the cup to California, Bubba Kush has bloomed into a premier flower.

The strain's heavy indica heritage is largely agreed upon, because of the strong correlating effects. Bubba Kush induces a sedative high and manages to not leave the smoker feeling couch-locked or dysfunctional. The strain can leave users feeling euphoric, relaxed, relieved, hungry, sleepy, and comfortable.

Negative effects can include dry mouth, dry eyes, headaches, paranoia, and dizziness. Users say the high starts out with slight disorientation and a fogginess. More experienced smokers can manage to be functional and social, but don't be ashamed if you find yourself drifting off.

Bubba Kush's exact genetic origin is unknown. Few trace the cannabis strain back to the Hindu Kush mountains, particularly the OG Kush strain, and to a debated indica parent. One story says a breeder from Los Angeles crossed an OG Kush plant with a Northern Lights variety obtained in New Orleans during Mardi Gras. The unknown parent strain, which is now lost, has since been known as "Bubba."

The strain's tones, including coffee, bubblegum, and chocolate, foster a delicious taste and dreamy experience. Bubba Kush buds can adopt either green or purple hues. The smaller, dense buds are heavily coated in white trichomes and resin can permeate the flower. Flower is pungent and can emit cocoa and skunky aromas.

Whatever the strain's history really is, users choose Bubba Kush for its experience, not its genetics. Since 1996, Bubba Kush seeds are only available as clones, but that doesn't stop dispensaries and growers from spinning off the strain.

Bubba Kush is considered easy to grow. Plants are normally short and can prosper indoors, outdoors, and in greenhouses, in areas with moderate and dry climates. The strain is resilient and can produce high yields of flower by the end of October.

When grown indoors, the plant will flower around 60 days. Plants are known to demonstrate a variety of indica phenotypes, or traits pulled out from the environment by the plant.

Where to Find Bubba Kush

Since Bubba Kush grows best in moderate and dry climates, the strain is easy to find in Denver. However, it's so popular that it can be found in any legalized state.