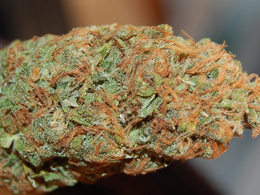 Blue Goo is a potent and popular hybrid with genetics from Blue Dream and Afgooey (also known as Afgoo). Blue Goo should absorb the best qualities of its genetic predecessors and pack light, social stoned good from your head to your toes. The Blue Goo strain, like its name, suggests, sprouts a variety of vibrant colors from dark purple to rusty red-orange. Though the identity of the original breeder is unknown, Blue Goo continuously grows in popularity in legalized states. Blue Goo's taste has layers of flavors of blueberry, pine, and occasionally vanilla.

Most breeders and cannabis sources break down Blue Goo as 60% sativa and 40% indica, though the profile may vary by strain in different states. Blue Goo is a mixture of Afgoo, a potent, landrace-derived indica, and Blue Dream, a legendary hybrid from California. Blue Goo, consequently, received its sticky, trichome-heavy texture from Afgoo and its coloring/mellow high from Blue Dream.

Backed by such powerhouse genetics, Blue Goo is quickly becoming a star in the cannabis world.

Blue Goo plants should pack small to mid-sized flower into a sphere. Hinting at its genetic heritage, Blue Goo grows the dense, tight buds of indica plants. The leaves can cultivate a deep, dark green hue that is punctuated by notes of burnt orange hair. Attractively, the flower comes coated with crystal-colored trichomes.

Depending on how you cure the plant, Blue Goo can emit fruity and tart scents. Some describe it as blueberry and lemon. Notes of earthy smells like cedar, pine, and diesel are in the strain's scent. Smokers report a smooth smoke and a lingering, fruity taste.

Smokers should note that the strain's blue hues do not necessarily foster a grape-like flavor. Preferably, a colder temperature while growing promotes anthocyanin pigments that produce blue-ish colors in marijuana plants.

Blue Goo creates a high balanced between indica and sativa. However, the strain's sativa genetics maintain persistent stimulation. The high is said to gradually build a sativa-style high that elevates the user's mood and heightens their sensory awareness. However, Blue Goo's indica genetics help anchors the smoker into a relaxing stone that tingles throughout the body.

Due to the even-keeled nature of the strain, smokers can indulge in Blue Goo during the day or night. The strain is a fantastic social lubricant for novice and regular smokers alike. Blue Goo inspires a focused sense of creativity and euphoria that is also said to help solve work or home-related problems.

Blue Goo carries a high THC potency. When consumed in large quantities, this may lead to dry mouth and red eyes. Some users report paranoia and overpowering effects of sedation.

The strain's genetics foster a sociable yet mellow high that is beloved by medical and recreational patients alike. Blue Goo is a strain that can do it all. This sativa-dominant hybrid absorbs the best traits of its genetic ancestry, including a calm yet tingling body high reminiscent of Afgoo and the sativa-style stimulation and energy of Blue Dream.

Blue Goo may not be the most comfortable strain to grow for beginners, as it requires a good deal of close attention throughout the process. Its buds largely grow outwards, necessitating some degree of support to hold them up.

Where to Find Blue Goo

This strain is popular in the Northwest, particularly in Oregon, Montana, and Washington.