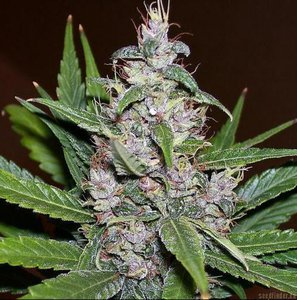 Aurora Indica is one of those hash-type marijuana strains. Its parent strains, Afghan and Northern Lights, bring sedative effects to create this magical relaxer. It' far on the indica side with Afghan being almost pure. It has an average amount of THC with a slow-rising high and a psychedelic result. Because this strain will leave you sedated, high doses are not for beginners.

Aurora Indica is 90% indica. The THC content averages 19% and contains a homogeneous variety of Afghani. The buds are dense and sticky, like the parent strains. Leaves of Aurora Indica are dark green and full. The crystals almost look purple, and it only has specks of bright orange hairs. The result is a cone-shaped flower. It is less frequent in the weed industry than strains such as Sour Diesel.

Aurora Indica has a spicy, pungent smell. It has both a smooth inhale and exhale. The spicy scent cut with a lavender undertone enhances the effects of the strain. The taste of this strain brings about a fruity sweet aftereffect cut with an earthy tinge.

Aurora Indica makes you feel good and even better while doing nothing. This strain has strong sedative characteristics. It creeps up on you, almost feeling like it's transferring a tingly sensation from the ground up. It ends with cerebral effects allowing for euphoria and happy feelings.

Users of Aurora Indica may experience adverse effects including dry mouth, red eyes, and paranoia. You may feel lethargic and the need for sleep, resulting from the sedative effects of Aurora Indica. Don't smoke this during the day unless you want to take a nap

The Afghani landrace originated in the mountains of Afghanistan. These dark green Indica plants are covered in white crystals and have an average of 22% THC. It's pure indica and typically used to make hash since it comes exceptionally resinous.

It takes about 55-65 days to grow indoors yielding 16-20 ounces per square meter. Outdoor plants need to be harvested by Late September to mid-October yielding 20oz+ per plant. It's easy to grow in warm and sunny outdoor climate and is resistant to common molds and mildew.

Northern Lights can be grown both indoors and outdoors with sunny Mediterranean climate. Indoor growing takes 7 to 9 weeks yielding 18oz per square meter. Outdoor flowers need to be harvested by mid-October producing 22oz per plant. Growing Northern Lights is easy, and the flower is resistant to most diseases.

Aurora Indica can be grown both indoors and outdoors in semi-humid daytime climates. The plants grow low with thick stems packing the plants close together. You should be at least a moderate grower before considering growing Aurora Indica. The flower grows medium to large and has a low resistance to molds, mildews, and pests.

Growing plants indoors takes about 55-60 days yielding 10 to 14oz per square meter. By mid-September, plants grown outdoors must be harvested. The average yield is 14oz per plant. The result makes its visual appearance look like a green sea of plants. While it can be grown both indoors and outdoors successfully, because of the pungent smell, people recommend using the indoor option.

Where to Find Aurora Indica