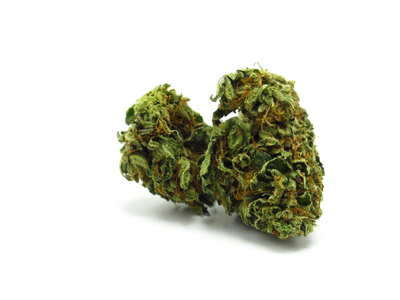 Alien OG is a hybrid comprised of Tahoe OG and Alien Kush, Alien OG represents one of the most-beloved and heaviest hitting Sativa-leaning hybrids money can buy. With seeds available through Cali Connection and a decent yield of 450 grams per square meter, Alien OG can be a good choice for intermediate or advanced growers. Whencultivated to its potential, Alien OG tests from 20% to 28% THC content, and between 0.1% and .28% CBD content.

Smoking this sweet, lemony strain gives you a quick cerebral high, followed by slow-moving total-body relaxation. Users find Alien OG's Sativa-heavy high helps them focus, come up with creative ideas, and stay awake and alert, all while enjoying the type of body high you can only find in the most stellar Indica strains.

Sativa-dominant hybrid, Alien OG is known for equal parts euphoric brain stimulation and total body relaxation, making it a favorite morning or early afternoon toke. Alien OG is known for its ability to lend relief to those suffering from depression, anxiety, fatigue, stress, and headaches. Alien OG is felt behind the eyes first, followed by a head rush and a rapid alteration of cognition.

Within about 10-15 minutes, you should be enjoying the cerebral effects of your first couple of tokes.

The Indica-body hits a little later, resulting in a quick rush of thoughts followed by a slow, rolling body high. The body high from Alien OG will have muscles and pains feeling soothed while the remains mind is highly active. Fair warning: Alien OG isn't considered to be best for nighttime use. A relative heavy-hitter, novice smokers or those with low tolerance may enjoy some minor psychedelic feeling effects, like bright colors, slowing of time, or external flashes.

Flavor notes differ a little in Alien OG, but the most common taste to look out for is a distinctly lemony, earthy aroma with a sweeter, even spicy taste. For highly attuned palettes, users may notice subtler notes of fresh pine as they light up. For those smokers hoping to keep their habits discreet, fair warning-Alien OG is a super pungent strain, and the sweet smell is likely to hang around.

Because this is a hybrid strain, we often see some differentiation in flower structure, ranging from a compact bud to the loose leaves that are typical of Sativas; though Alien OG buds are sold in small nugget clusters more often than not. The leaves should be a lovely light green, with pistils presenting as a fiery orange or bright red.

With such high THC levels, it's no surprise that Alien OG flowers are super resinous, with the frosty aesthetic and moist feel typical of trichomes.

As far as effects are concerned, Alien OG gives users a high that might leave them feeling energized, focused, and relaxed. Bonus: Alien OG is known to help you get your creative juices flowing, so smoke during the day to take advantage of an out-of-this-world mind transformation.

You can expect a case of dry mouth with Alien OG, which is typical of my experience with most strains of cannabis. Some folks do also get dry eye as well, so if you are prone to that, you may want to have some eye drops available. Because this can be a heavy hitter, consuming too much can lead to dizziness, headache, and paranoia.

The Lineage of Alien OG

The offspring of much-beloved Tahoe OG (a phenotype of OG Kush) and Alien Kush, Alien OG has made quite a name for itself in recent years. Starting as a clone-only strain in dispensaries around Northern California, Cali Connection has begun producing its own Alien OG seeds, and the strain is now widely distributed across many West Coast dispensaries.

With such an excellent strain comes to a slightly tricky growth process. As a result, Alien OG is often not an excellent choice for first-time growers. Typically grown indoors, the short, bushy plant often has trouble developing a robust root system, and can require a lot of TLC in the form of nutrients when first planted. The plants also usually need to be topped, trimming larger fan leaves to let the light and air permeate the nodes growing lower down. Overall the growth process should take between 7 and nine weeks, with an average yield.

Where to Find Alien OG

Ready to spend the day with the Alien OG? If you're looking to get your hands on some Alien OG, you're best off sticking towards the west coast. Alien OG is popular in Michigan, Colorado, Arizona, Nevada, California, Oregon, and Washington.