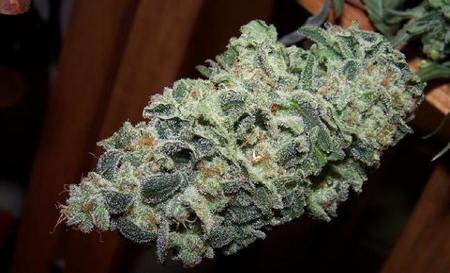 Alaskan Thunderfuck, also known as Matanuska Tundra, is a robust, sativa-dominant hybrid. These beautiful cannabis plants have a strong aroma and colorful appearance. Users report this energetic, creative weed can help you break through even the toughest of mental blocks.

If you want to grow this plant yourself, with the peace of mind of a germination guarantee, buy your seeds from Homegrown Cannabis Co.

This unique strain packs in high amounts of potency in its frosty buds. Alaskan Thunderfuck (also known as ATF, Matanuska Thunderfuck, and Matanuska Tundra) is an esteemed sativa-leaning strain stemming from the Matanuska Valley in Alaska.

ATF is a cross between an unknown North American sativa, Afghani, and a Russian Ruderalis. The genetics make it an ideal afternoon or daytime bud due to its creeping, stony effects and lingering, sativa high.

The strain is said to induce a massive sense of physical relaxation. ATF nugs sprout varying colors of green and streaks of orange hairs.

In addition to the strain's striking appearance, ATF boasts an enticing earthy and slightly citrus scent.

Depending on the batch, users also get notes of wood, pine, and flowers. Smokers can enjoy a medley of flavors, including sweet orange, banana, and sage.

When heated, ATF gives off a strong scent of wood, pine, citrus, and diesel. It's in the mid-range of potency with a THC content that can range from 14% to 18%. ATF's sativa genetics deliver a heady, uplifted high to jump-start your morning.

Famous for decades, this marijuana strain was a feature in High Times in the mid-1970s. Its pedigree speaks for itself.

ATF is the perfect strain to enjoy socially, with users saying it made them more chatty and stimulated. It's well-known for delivering a sense of euphoria, creativity, energy, and relaxation.

Like other sativa strains, dry mouth and red eyes can be common side effects. Users can occasionally experience anxiety, paranoia, and headaches after consuming too much ATF.

The exact genetics of ATF is a hot topic in the cannabis community. It is generally accepted to be a NorCal marijuana strain crossed with a ruderalis variety from Russia.

Ruderalis is a subspecies/related species of cannabis, native to Asia and Central/Eastern Europe.

Due to shorter growing seasons and the extreme nature of the climates, ruderalis varieties are smaller and shorter. Generally, ruderalis plants naturally possess lower levels of THC.

In the late 1970s, breeders mixed the sativa version of Alaskan Thunderfuck with an Afghani plant, creating a stronger, more balanced, photoperiod strain.

Originally bred to withstand the climate in Alaska, this is a hardy plant that loves cooler, outdoor weather. Said to produce massive yields when grown outside, the plant delivers an average 32 ounces of weed per seed outdoors, with an average of 16 ounces per square meter when grown indoors.

When growing indoors, cultivators can expect a harvest in eight to nine weeks from flowering, while outdoor growers should expect to harvest around October.

Where to Find Alaskan Thunderfuck

Naturally, the most common place to find ATF is in Alaska. The hearty plant loves the Northern climates. However, this strain is also common in several regions in Canada, Washington, Oregon, Colorado, and is even making its way to Arizona and Nevada.

If you want your seeds delivered, check out Homegrown Cannabis Co. They deliver to around 50 states, offer a germination guarantee, and even teach you how to become a master grower. Head over to the website now for tons of free tips and tricks.