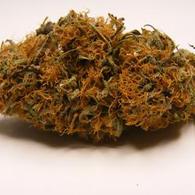 Orange Crush stimulates your senses to fuel a powerful mental high that can ease your pain and jumpstart your day. The sativa-dominant hybrid is generally pleasing for beginner and experienced smokers, alike. Reports can vary, but Orange Crush remains a popular choice for young smokers across Colorado and the West Coast. The strain doesn't lack customer appeal as Orange Crush packs a dank smell and signature citrus flavor.

Orange Crush is a sativa-dominant cannabis strain with a super sweet, tangy flavor and aroma. Bred by BC Growers Association of California Orange and Blueberry for parents, Orange Crush produces a powerful cerebral sensation that can last up to two hours. It has small, dense buds that contain a significant amount of trichomes and many orange pistils. Orange Crush has a flowering time of 7-9 weeks.

Due to the strain's ability to produce a soaring head high that lasts for hours, veteran smokers suggest savoring Orange Crush during afternoon sessions. On average, Orange Crush varieties usually clock in at 11% to 13% THC making it relatively easy marijuana to smoke for novices. However, Orange Crush strains have been reported containing as high a percentage as 29% THC.

Orange Crush commonly produces a mostly cerebral sensation. However, the strain's high has been reported to last up to two hours. Most common effects from consuming the Orange Crush strain include euphoria, relaxation, and energy. First-hand accounts also note that the strain can effectively inspire creativity and fuel daytime activities. Regular enjoyers may also report a heavy visual element to the strain; Orange Crush is said to illuminate colors and lights when used during the day.

Recreational patients have also found that Orange Crush can inspire mental creativity as they work on mundane work or household tasks.

The strain's most common negative effects are red eyes mixed with a dry mouth. Users have also reported the occasional dizziness and paranoia. The strain's generally mild cerebral high and encompassing creative effects make Orange Crush an ideal sativa hybrid for new smokers. However, as with all marijuana, users should be mindful of their consumption.

The genetic origin of Orange Crush is debated across cannabis networks. Most attribute Canadian-rooted BC Growers Association for the initial creation of Orange Crush. It's understood that the growers crossed California Orange with a Blueberry strain to create the reliably enjoyable marijuana strain we have today.

California Orange is an old-school style strain that's dominated cannabis markets since the 1950's; the hybrid is known for its even balance between indica and sativa influences and its uplifting, clear-headed high. Blueberry first arrived on the cannabis scene in the 1970s -- also with mysterious origins -- and still draws headlines today for the strain's heavy yields and striking blue appearance.

Orange Crush seeds can flower within seven to nine weeks. Plants should possess smaller, dense buds covered with orange pistils and a substantial amount of trichomes. The strain is recommended for newer growers on a time crunch or a tight budget. Orange Crush can thrive under low light and is generally easy to manage.

Where to Find Orange Crush

Those looking to enjoy this relaxing, energetic marijuana will have an easy time sourcing it within Oregon and California as it is most popular on the West Coast. Buyers in landlocked states such as Colorado will be able to find this strain, with a little more searching than their coastal neighbors.