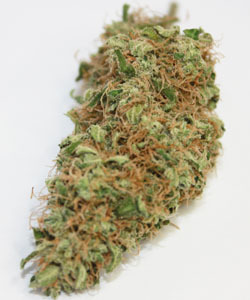 ENERGIZED
Jillybean is a fruity hybrid strain known for its uplifting effects and its taste, which is reminiscent of jelly beans along with orange and mango flavors. It is the child of two hybrid parents, Orange Velvet and Space Queen. The strain can be evenly split between sativa and indica, or it may be offered as a 60/40 sativa-dominant hybrid. In either case, tokers enjoy the Jillybean high for its balance of typical sativa and indica qualities.Jillybean was originally bred by a woman named Ms. Jill, a female pioneer in the male-dominated world of cannabis cultivation. It inherits the bulk of its flavor from the Orange Velvet strain, which carries a pungent fruity taste and aroma. Orange Velvet is only mildly potent, so it was crossed with Space Queen to create a strain with a bit more "kick" to it. The resulting Jillybean hybrid gives the smoker a happy, euphoric high that is great for social events or getting work done. It is a good daytime or wake-and-bake strain, though some users have expressed that the indica element of Jillybean -- which takes effect after calming down from the initial cerebral boost -- can cause enough drowsiness for a midday nap or nighttime sleep. Dry eyes are a possible side effect after smoking Jillybean, though the strain is not known for causing excessive amounts of anxiety or paranoia.

Jillybean can be grown both indoors and outdoors, though it is recommended that outdoor growers stick to dry climates where heavy rainfall is rare during summer months. The strain will benefit from topping, and indoor growers can try cultivating in soil or hydro. Jillybean buds are slightly dark green with orange pistils and plenty of crystallized trichomes. The exterior leaves can take on a dark red or purple hue, resulting in a flower that is quite pleasing to the eye. With a THC level of 15 to 18%, Jillybean ranks in the midrange of potency. The strain also contains about 1% CBD. Its aroma resembles orange sherbert or an orange creamsicle, a direct result of its Orange Velvet parent. Pungent citrus flavors remind the smoker of orange, mango and sometimes pineapple. Jillybean is smooth on the inhale and packs a punch of childhood candy goodness. With a nearly even split of sativa and indica, the strain offers a nice balance of an uplifting cerebral high and a calm, relaxing feeling.

Jillybean is most popular along the United States' West Coast, but it can also be regularly found in Detroit and Colorado. Due to its propensity to grow better in dry climates, Southern California cultivation farms report particularly good results from outdoor Jillybean crops. It is an all-around quality strain for those looking for great taste, fruity aroma and elements of both indica and sativa highs. It is not the most potent strain on the market, but it makes for a good anytime smoke that has euphoric effects.