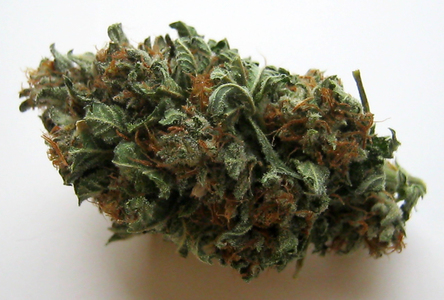 Hawaiian Skunk packs a punch as a THC-loaded hybrid strain that offers the best of both worlds. As sweet, earthy, and skunky flavors overwhelm the senses, a sativa-generated stimulation will pair nicely with a sense of indica-induced relaxation. Sleepiness is the main effect. give it a few minutes (sometimes even a few moments), and Hawaiian Skunk will put users into slumber, though not before providing a sense of uplift and relaxation, triggering the brain just right.

While still a rather uncommon strain, Hawaiian Skunk is an indica-dominant hybrid mix of flower, with strong sativa traits shining through. Its parents are Hawaiian Indica and Skunk #1, which both offer potent traits specific to their phenotype. Hawaiian Skunk gets its musky, skunky smell and heavy head buzz from its Skunk #1 roots, and its sedative qualities come from that indica lineage. The strain has a high THC content, making for a strong psychoactive high before the user's inevitable drift into sleep.

Hawaiian Skunk is light green in color with a poppy bud. This strain is known for its earthy flavor with subtle hints of sweetness, followed by a blast of skunk-like aroma, typically associated with a dank brand of weed. It's well-balanced and a helpful aid to restless nights.

Hawaiian Skunk has many positive effects that make users come back for more. In addition to making tokers incredibly sleepy, this strain also uplifts, relaxes, and gives a sense of euphoria. It's a happy high that often leads to a fit of the giggles - if sleep doesn't come first. Both the body and mind are affected: As the tides of slumber slow down the body, the mind is buzzing with upbeat enjoyment before the crash.

While Hawaiian Skunk has mostly positive effects, usage has one clear negative consequence: dizziness. Users should be wary of this and plan accordingly. Be comfortable and in a spot safe to lie down or go to sleep. Other side effects, like dry mouth and dry eyes, are also possible.

The high THC content comes from Hawaiian Skunk's parent strains, Skunk #1 and Hawaiian Indica. Skunk #1 was a hybrid strain created in the 70s and is known for its traits of physical relaxation felt throughout the entirety of the body.

The Hawaiian indica's past is spottier, though the effects are clear: it produces an award-winning high with tropical stoney effects. Mixing the two brings forth the joy of Hawaiian Skunk, a bud defined by its balance.

Hawaiian Skunk is a high-THC strain that is easily grown outdoors with very few concerns. It is best grown in warm and dry climates, such as California, and can be recognized by its short stalks, which are resistant to mildew and molds.

While considered very well-balanced in effects, Hawaiian Skunk has a higher indica ratio. Its phenotype is about 65% indica and 35% sativa and is often considered a good choice for novice growers. It tends to flower in about 10 to 12 weeks.

Where to Find Hawaiian Skunk

The best place to find Hawaiian Skunk is at dispensaries in California. San Francisco, South San Francisco, and Daly City are the most popular locations for this hybrid strain. Additionally, Washington, Oregon, and Nevada have seen this strain.