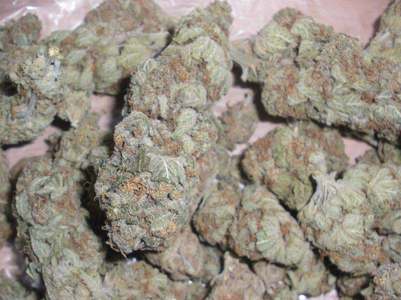 FOCUSED
This isn't your mother's standard Grapefruit. The sativa cannabis strain known as Grapefruit has the signature citrus scent and sweet taste of its moniker. The strain often has higher THC content and fluctuates between 15% and 20% THC. Grapefruit also grows well and can deliver plentiful, quantity yields for knowledgeable growers.The Grapefruit strain, despite its mysterious origins, is known for its strong sativa high and bold, fruity flavor. Few sources claim that there are two Grapefruit strains currently circulating throughout cannabis circles, but most marijuana resources and growers concede that the well-known Grapefruit variety is bred from two sativa-dominant strains. Nectar's Grapefruit, bred by Nectar Seeds, crosses Cinderella 99 (also known as Cindy 99 or C99) and an unknown, landrace sativa to create a potent and euphoric hybrid. It's said that the mysterious landrace strain is where modern Grapefruit varieties adopt most of their fruity flavors. Most Grapefruit strains that consumers will encounter in legal medical and recreational dispensaries are derived from Nectar Grapefruit genetics. Older consumers may have sampled other famous strains from Nectar Seeds, like Blackberry, C99, and Thai 99. Whichever Grapefruit variety you end up smoking, the strain should cultivate a euphoric, energetic, and exhilarating high. The genetics from Cindy 99, a strain that is widely considered the "Holy Grail" of pot, help foster Grapefruit's intense yet clear high. Due to the strain's relatively lucid effects, Grapefruit is a great strain to share in group situations and it can facilitate social interactions. Additionally, smoking, vaping or otherwise consuming Grapefruit can encourage creativity and a pleasant sense of happiness. Therefore, Grapefruit has become increasingly popular in cannabis circles for its old school-style high reminiscent of landrace sativa strains. Experienced smokers report that Grapefruit can elevate their mood before daytime recreational and work activities. Word to the wise: perhaps only indulge in working under the influence of Grapefruit when you work from home. THC tests backup users' praise for Grapefruit. The strain possesses a relatively high THC content and Grapefruit varieties can measured from 15% to 20%. Occasionally, those that smoke Grapefruit can experience dry and red eyes. Few have reported dizziness and paranoia. However, Grapefruit's negative side effects are minimal compared to other hard-hitting strains. Grapefruit's potent smell definitely lives up to its citrus-inspired name. Users often detect a tropical and fruity smell reminiscent of the strain's sweet flavor. Overall, the strain tastes like its namesake but can lean on the sweet side. Grapefruit seeds can grow well both indoors and outdoors. In either environment, the strain can deliver relatively high yields within 58 to 69 days. Due to the strain's recognizable, telling name and signature scent, Grapefruit has become popular throughout the United States and Canada. The strain has culminated a following throughout the West Coast, including states like California, Washington, and Colorado. Grapefruit's energizing effects are best utilized during the day. The strain is an excellent social lubricant for situations like backyard barbecues and day parties.