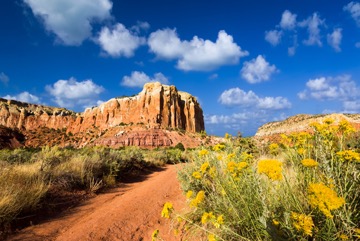 Like many other U.S. states, New Mexico marijuana laws start in the 1920s amid a wave of prohibition that barred the use of many popular substances, including alcohol. The year was 1923, and New Mexico had just passed a law banning the cultivation, transportation, and sale of marijuana. Two years later, a revised version of 1912's International Opium Convention added marijuana to its list of dangerous drugs and by 1935 President Roosevelt was selling marijuana prohibition to the American public in a radio address that many believe marked the beginning of our nation's long and protracted drug war against marijuana and other controlled substances that largely continues to this day.

Fast forward to 1978 when New Mexico passed the Controlled Substances Therapeutic Research Act, making the state the first in the nation to recognize the medical benefits of marijuana. Approved by the Food and Drug Administration and distributing marijuana from the National Institute on Drug Abuse, the nascent program had federal backing by the end of the year, but it was too late for Lynn Pierson, a cancer patient and major proponent of the bill, who died before any cannabis was actually delivered to the state. However, hundreds of cancer patients were served by the Lynn Pierson Therapeutic Research Program, which sourced and distributed marijuana to New Mexico residents for almost 10 years.

In 1999, New Mexico Governor Gary Johnson shocked the state and his fellow Republicans by endorsing marijuana legalization, arguing that the drug was far less dangerous than many legislators and law enforcement officials would admit. But it wasn't until 2007 that Governor Bill Richardson signed Senate Bill 523, which legalized medicinal marijuana in the state. Called the Lynn and Erin Compassionate Use Act, the bill allowed a physician to recommend marijuana use for the treatment of medical conditions such as cancer, HIV/AIDS, multiple sclerosis, epilepsy, and other debilitating diseases.

Just this year, marijuana laws in New Mexico toyed with legalization when a new cannabis bill passed the House of Representatives but stalled in the state's Senate Finance Committee. Seeing the promise of a recreational law, New Mexico Governor Michelle Lujan Grisham has promised to add the issue to next year's 2020 legislative agenda. As a precursor to next year's vote, Governor Lujan Grisham in April decriminalized marijuana possession of up to a half ounce as a misdemeanor offense carrying just a $50 fine. The bill also decriminalizes the possession of drug paraphernalia and will go into effect on July 1, 2019.

Yes, in 2007 the New Mexico legislature passed Senate Bill 523, also known as the Lynn and Erin Compassionate Use Act, which allows the state to register qualified individuals to grow, possess, and use marijuana and marijuana-infused products in limited quantities.

In order to qualify for the program, a person must be diagnosed with a debilitating disease that significantly impacts the quality of life of the patient, or is a terminal disease. While originally accepting only seven approved conditions, New Mexico marijuana laws now recognize 21.

If you've ever wondered how to get a medical card in New Mexico, check out our video.

Is weed legal in New Mexico?▼▲

With the March 2019 defeat of House Bill 356, recreational marijuana use is not permitted in the state of New Mexico. However, the close vote has prompted calls for a revisit during the 2020 legislative session, and a recent decriminalization bill has made possession of up to half an ounce of marijuana and all drug paraphernalia petty misdemeanors that carry small fines.

Where are the dispensaries located in New Mexico?▼▲

Due to New Mexico weed laws, only licensed producers may sell marijuana products to medical cardholders or their caregivers.

Are the New Mexico dispensaries recreational or medical?▼▲

In 2016, lawmakers in the state proposed three bills legalizing marijuana for adult use, but none were passed into law. Many believe the state is on the cusp of legalization and may join the growing number of recreational states by the year 2020.

As banks and other card processing companies are still regulated by federal banking laws that prohibit dealing with federally illegal businesses, most dispensaries in the state of New Mexico are cash-only. However, many dispensaries have an ATM or two on site and may be able to run a purchase as a debit/ATM transaction -- just make sure you watch those fees.

Medical marijuana cardholders or their designated caregivers may grow up to 16 plants, with no more than four flowering plants and 12 immature plants at any one time. Note that a Personal Production License grow permit must be obtained prior to any medical marijuana cultivation, a stipulation of New Mexico cannabis laws.

Recreational users and other non-patients, on the other hand, will face a felony offense and up to nine years in jail for the unlawful cultivation of marijuana.

According to marijuana laws in New Mexico, registered medical marijuana patients may possess as much as eight ounces of marijuana at any time.

Can you go into a dispensary when you're under 21 in New Mexico?▼▲

As recreational marijuana use is not yet legal in the state, you may not enter a dispensary unless you are a medical marijuana patient, caregiver, or an industry employee, regardless of your age.

How old do you have to be to purchase marijuana in New Mexico?▼▲

Do you need a medical card to buy from a dispensary in New Mexico?▼▲

Yes, you must be a medical marijuana cardholder or a designated caregiver to purchase marijuana from a dispensary in New Mexico.

Do you need a medical card to enter a dispensary in New Mexico?▼▲

Only medical marijuana cardholders, their caregivers, or store employees are allowed to enter a dispensary in New Mexico.

New Mexico medical marijuana patients may possess up to 8oz of marijuana over a 90-day period.

As of May 2019, any non-medical marijuana patient caught in possession of marijuana in New Mexico without a valid medical marijuana card, or who is not a caregiver or industry employee, is subject to misdemeanor criminal charges, 15 days in jail, and a $100 fine if caught with less than one ounce. For possession of more than one ounce, penalties rise to one year in jail and a $1,000 fine.

Due to marijuana laws in New Mexico, private residences remain the safest place to use medical cannabis, but you are only protected if you are a medical marijuana patient -- recreational use is not allowed.

New Mexico's medical cannabis program has prohibited the use of marijuana consumption in the following places:

While public consumption is prohibited, cardholders and caregivers may possess marijuana and marijuana-infused products at all times.

Most marijuana in the state is grown by licensed operations that have been approved by the Department of Health. Part of New Mexico medical marijuana laws, dispensaries must maintain non-profit status and a health board consisting of a doctor, nurse and physician.

Medical marijuana cardholders or their designated caregiver may cultivate as many as sixteen plants under two conditions:

Any person caught cultivating marijuana without a Personal Production License is subject to felony charges, including fines up to $10,000 and nine years in prison.

New Mexico weed laws prohibit the cultivation of marijuana unless authorized by the state as a licensed grower, medical marijuana patient, or caregiver. Recreational cultivation is expressly prohibited.

Only individuals that are allowed to possess marijuana are legally allowed to transport it within the state. This includes medical marijuana cardholders, their caregivers, or an employee of a licensed marijuana business. All others will be breaking New Mexico marijuana laws, even if decriminalization has reduced the penalties of up to half an ounce to a misdemeanor and $50 fine.

Marijuana and Driving in New Mexico▼▲

Though New Mexico has reduced penalties for possession of marijuana in the state, driving while under the influence of marijuana remains a criminal offense in New Mexico and is punishable by up to a $500 fine, 90-days of imprisonment, and 24-hours of community service. Additionally, anyone caught driving under the influence may be subject to a license suspension and may have to participate in a driver rehabilitation program. Licensed medical marijuana cardholders, caregivers, and production center employees may transport medical cannabis freely in the state but may not open packaging while driving on public roads. Transporting marijuana across state lines, even to other legal states, is against New Mexico marijuana laws.

If you're looking for a medical marijuana dispensary in the state of New Mexico, you've come to the right place. With all the rules and regulations, it can be hard to know where the legal dispensaries are, and Leafbuyer is here to help. Check below for our interactive map, or click one of the following links for a dispensary close to you:

Click the map to explore dispensaries in New Mexico.

Whether you're looking for a dispensary, delivery service, or even a 420-friendly doctor, Leafbuyer is your one-stop shop for marijuana services in New Mexico. Our weed deals are the best in the state, and since you can browse by product, strain, brand, or price, you can rest assured knowing Leafbuyer saved you some time and a chunk of change. So don't wait, and start browsing deals now!