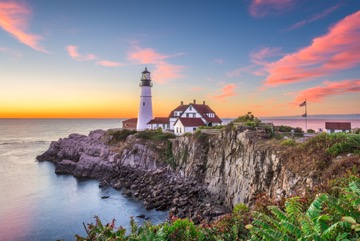 Known for its lighthouses, fresh lobster, rocky shores, and wide-open spaces, Maine is a versatile state that's also growing in recognition for its quality cannabis. In 2016, Maine became one of 10 U.S. states allowing the recreational use of weed.

But the story of Maine marijuana laws starts over 100 years earlier when in 1913 it banned the drug two years after the first state, Massachusetts, started requiring prescriptions for cannabis.

It wasn't until 1976 that Maine started its long march to legalization with a decriminalization bill that reduced penalties for small amounts of marijuana possession in the state.

In 1999, Maine again made headlines by passing medical marijuana just three years after the first state, California, did so in 1996. The Maine Medical Marijuana for Specific Illnesses Bill, also known as Question 2, was passed by 61 percent of the vote and allowed up to 1.25 ounces of marijuana to be harvested from six home-grown plants, of which no more than three could be flowering at any one time. Unlike most medical marijuana laws, Question 2 was unique in that patients could not buy marijuana from medical dispensaries and instead had to grow their own cannabis at home or have a caregiver do it for them.

In 2009, Maine medicinal marijuana laws were revisited and expanded to add the licensing of dispensaries and production facilities, and, that same year, legislators in Maine reduced criminal penalties for possessing up to 2.5 ounces of marijuana down to a civil infraction, which drastically lowered the burden on the state's already strained correctional facilities.

Learn more about marijuana in Maine 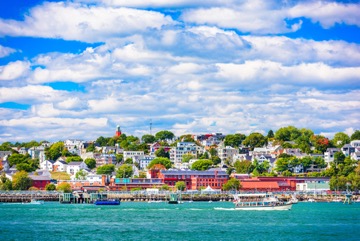 From 2013 to 2014, various Maine municipalities voted on the recreational use of marijuana within their jurisdictions, starting in Portland on November 5, 2013, which legalized the possession of two and a half ounces of marijuana within city limits, and South Portland, which also legalized small possession amounts in the city in 2014's November election. A referendum in Lewiston that same year, however, failed to gain the support of voters.

Though they were largely symbolic, the smaller, municipal victories in Portland and South Portland paved the way for statewide recreational legalization, which, on November 8, 2016, was passed by less than 4,000 votes, 50.26 percent to 49.74 percent.

Maine Question 1, also known as the Marijuana Legalization Act, took effect the following year on January 30, 2017 and legalized the possession, purchase, cultivation and use of marijuana by adults 21 years and older in the state. Due to several legal challenges and a governor that twice vetoed recreational marijuana against the wishes of voters, full roll-out of the law and the licensing of dispensary locations has been pushed back but is expected by mid-2019.

Voters in Maine first legalized the medical use of marijuana in 1999, which allowed a qualified medical professional to recommend marijuana for the treatment of individuals with certain qualifying diseases or conditions. The law, however, failed to create a way for registered individuals to purchase marijuana and instead relied on home cultivation for patients and caregivers.

In 2009, voters again passed a medical marijuana ballot measure in the state, this time expanding the number of diseases and conditions accepted by Maine marijuana laws, as well as increasing the possession limits. Most importantly, the law created a framework for marijuana dispensaries and growers for the state.

That same year, Maine lawmakers also decriminalized marijuana possession under 2.5 ounces down to a civil infraction.

Is weed legal in Maine?▼▲

With the passage of Maine Question 1 on October 8, 2016, the recreational use, cultivation, possession, and sale of marijuana is legal for adults over the age of 21 in the state. The law, which was supposed to go into effect 40 days following the election, was beset by legal challenges, a recount in December of that year and a gubernatorial challenge the following November when then-Governor Paul LePage vetoed the regulation and taxation of marijuana, citing “unrealistic timelines” and a conflict with federal law. In May of the following year, the state legislature overturned his veto and upheld the recreational-use law. Discover our Maine marijuana tax guide to see how this overturn affected the state.

Where are the dispensaries located in Maine?▼▲

Maine marijuana laws have so far limited the state to eight medical marijuana dispensaries, each located and serving a different part of the state. They are located in Biddeford, Ellsworth, Auburn, Caribou, Bath, Brewer, Gardiner and Portland.

Are the Maine dispensaries recreational or medical?▼▲

Currently, only medical dispensaries are open for business in Maine.

Though it is legal to possess, cultivate, and use marijuana for adults 21 and up, recreational dispensaries are not expected to be fully operational in Maine until mid-2019.

The law legalizing the recreational use of marijuana does not set a limit on the number of retail dispensaries. Instead, Maine marijuana laws give power to local governments to limit and regulate marijuana businesses operating within their jurisdictions, or to ban them altogether.

Due to the federal illegality of cannabis, dispensaries in the state are cash-only. However, most dispensaries have an ATM on site and may be able to run your debit card as an ATM purchase.

Under both medical and recreational marijuana laws in Maine, growing your own weed is legal.

Medical patients, their caregivers, and recreational consumers may grow as many as six mature, flowering plants and up to 12 immature plants or seedlings at any time. Thinking about growing your own? Check out our helpful guide on the best nutrients for cannabis outdoors, before you plant!

Maine weed laws allow medical marijuana patients in the state to purchase up to five ounces of cannabis in any 30-day period; however, a dispensary may only sell up to 2.5 ounces of marijuana to a qualified patient or their caregiver every 15 days.

Recreational consumers, on the other hand, are limited to purchase or possess 2.5 ounces of flower marijuana and up to twelve immature marijuana plants.

Both patients and recreational consumers may gift or transfer up to 2.5 ounces of marijuana to another individual aged 21 or older as long as no money changes hands and the transaction is not advertised. Any individual caught in possession of more than 2.5 ounces may be fined as much as $1,000 and sentenced to up to six months in jail.

Can you go into a dispensary when you're under 21 in Maine?▼▲

All marijuana dispensaries in Maine currently only serve medical patients and have no age limits -- you just need a Maine medical marijuana card.

In addition to a recommendation from a doctor, minors under the age of 18 are required to have the permission of a parent or legal guardian.

How old do you have to be to purchase marijuana in Maine?▼▲

As there are no legal recreational dispensaries in the state, only medical marijuana patients are allowed to purchase cannabis at this time. Adults over the age of 21, however, can grow marijuana at home and are legally allowed to possess and use marijuana.

Do you need a medical card to buy from a dispensary in Maine?▼▲

Do you need a medical card to enter a dispensary in Maine?▼▲

While some dispensaries may have a lobby or admittance area where they check ID, you will not be allowed to browse or purchase products unless you are a medical marijuana cardholder.

Once recreational dispensaries open in the state, adults will be allowed to purchase up to 2.5 ounces of marijuana from a certified dispensary.

Similarly, medical marijuana cardholders may not smoke marijuana on any form of public transportation or in any public place, including public roadways, parks, and buildings. Additionally, marijuana can never be possessed or consumed on federal property, in a school bus, on the property of any preschool, primary, or secondary school, in any detention center or correctional facility, or in a way that would constitute negligence or put others at risk.

The public consumption of marijuana carries a fine of no more than $100.

All licensed growers in the state must be Maine residents and maintain nonprofit status. Additionally, any municipality can reject or deny marijuana businesses in their territories, so be sure to check with local authorities before attempting to establish a marijuana grow op.

An adult in Maine may cultivate up to three flowering marijuana plants, 12 immature plants, and unlimited seedlings, according to Maine recreational weed laws. An adult can legally possess all of the marijuana produced by the plants.

Any person caught transporting marijuana across state borders may find themselves facing federal drug trafficking charges and up to five years in prison. Many people often wonder can you bring weed across the Canadian border from Maine, and the answer to that is also a firm no.

Any person under the age of 21 who is not a medical patient caught transporting marijuana is subject to having their driver's license revoked for up to five years.

Is marijuana delivery legal in Maine?▼▲

Recreational delivery is not legal at this time.

Marijuana and Driving in Maine▼▲

Maine does not allow any person to operate, navigate or be in actual physical control of any type of motor vehicle -- including aircraft, motorboat, snowmobile or all-terrain vehicle -- under the influence of marijuana. This applies equally to both medical and recreational consumers.

For the time being, the state has yet to update their operating laws concerning driving while under the influence of marijuana, despite efforts in 2016 to define a limit of THC that would be acceptable to determine intoxication.

Any person caught driving while under the influence of marijuana may face a 90-day license suspension, a $2,000 fine, and up to one year in jail and one year of probation.

If you’re searching for dispensaries in Maine, Leafbuyer has your back. Using our search engine, it’s easy to find the closest dispensary to you in just a matter of seconds. And, once recreational legalization hits, we’ll continue adding locations and services, so you won’t ever be left in the dark. Just click the links below for the closest major city or jump right into the map for an interactive search.

For the best Maine weed deals, keep it right here on Leafbuyer. You can search by dispensary, product, type, strain, and brand, so you’ll be sure to find what you’re looking for quickly and easily. We can even help you find marijuana growing supplies and marijuana storage containers if you’re looking to start growing. Happy shopping!