As the only state to pass a medical marijuana law when they already had one on the books for 35 years, the state of Illinois has had a long and complicated history with weed.

It all started in 1931 when the state, amid a wave of prohibition efforts across the country, banned the use of cannabis. Six years later, the Marihuana Tax Act of 1937 barred all marijuana transactions nationwide with a classic catch-22: all marijuana sales would be taxed, but the stamps used to pay the tax made it illegal to not already own them. And in 1970, the Controlled Substances Act made all cannabis use illegal in the U.S., including for medicinal purposes.

Illinois tried to rectify the medical ban in 1978, recognizing the widespread use of the drug and seeking to establish a more common-sense approach to existing Illinois marijuana laws. The resulting Cannabis Control Act gave the Illinois Department of Human Services and the Department of State Police the permission to work together to establish rules and regulations for medical marijuana in the state.

There was only one problem: neither agency wanted to act first and both deferred to the other, leaving the new Illinois medical marijuana law dead in the water.

Thirty-five years later, amid growing support in the state, the Illinois General Assembly in an act of deja vu passed the Compassionate Use of Medical Cannabis Pilot Program Act, which was signed into law by Governor Pat Quinn on August 1, 2013. The law, which went into effect on January 1, 2014, made Illinois the 20th state to allow medical marijuana, though they could have easily been the first by 18 years (California, 1996).

Learn more about marijuana in Illinois 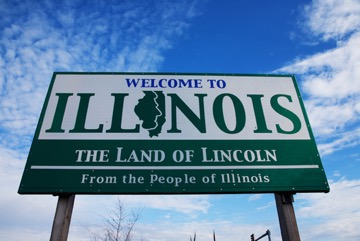 Unlike the 1978 law, the 2013 medical cannabis bill established the ubiquitous ID card system used in many other states, and also defined 30 medical conditions that would qualify for the nascent program. As of this year, over 60,000 patients participate in the state's medical marijuana program.

Three years later, Illinois marijuana laws were again updated, this time reducing the penalty for marijuana possession of less than 10 grams from a misdemeanor down to a civil fine.

Two years after that, in 2018, the state's medical marijuana program was greatly expanded amid fears of a growing opioid epidemic in the state and nationwide. Changes included ditching the required background check and fingerprinting of applicants, which greatly reduced the burden on patients seeking medical marijuana relief and led to a large uptick in the number of applicants in recent years.

In 2019, Illinois is expected to pass some form of recreational marijuana as Governor J.B. Pritzker has made legalization his top priority and several marijuana bills are in the works. One version, first floated in 2017 by lawmakers, would allow adults to possess 28 grams (one ounce) of flower marijuana and grow up to five plants at home.

Is weed legal in Illinois?▼▲

Yes, marijuana has been legalized since Gov. J.B. Pritzker signed the bill into law in June 2019. Until mid-2020, only medical marijuana dispensaries will be able to sell marijuana products to the public. Illinois residents can possess up to 30 grams of flower, and up to 5 grams of concentrates. Illinois visitors are legally permitted to obtain half of the resident's limit of marijuana products

Where are the dispensaries located in Illinois?▼▲

Illinois marijuana laws created 43 distinct medical marijuana districts in the state, with limits on the number of dispensaries and cultivation centers allowed in each district.

Today, there are more than 50 medical marijuana dispensaries available to cardholders across the state and 46 of whom have been approved to supply for recreational use. Additionally, more than 20 growers are licensed to provide the dispensaries with product.

Are the Illinois dispensaries recreational or medical? ▼▲

As federal law prohibits banks and credit card processing companies from dealing with marijuana businesses, dispensaries in the state are cash only. However, many have ATMs on site and may be able to run a purchase as an ATM transaction. A select few dispensaries are accepting payment via phone payment apps such as CanPay.

According to Illinois marijuana laws, medical marijuana patients in Illinois can grow up to five plants at a time. Recreational cannabis cultivation is not allowed at this time.

"Craft growers" are allowed to apply for growing licenses allowing up to 5,000 sq. ft. for cultivation.

Illinois residents can possess up to 30 grams of flower, and up to 5 grams of concentrates for adult consumption. Illinois visitors are legally permitted to obtain half of the resident's limit of marijuana products.

Can you go into a dispensary when you're under 21 in Illinois?▼▲

For recreational users, they must provide governmental documentation such as an ID or passport to confirm they are 21+ years old.

How old do you have to be to purchase marijuana in Illinois?▼▲

According to Illinois weed laws, anyone with a valid medical marijuana card can purchase cannabis from a licensed dispensary.

While there are no age limits on the state's medical marijuana program, minors under the age of 18 must get the approval of two doctors, as well as their parent or legal guardian, to register for a marijuana card.

Recreational consumers need to be 21 years of age or older to purchase or possess cannabis in the state.

Do you need a medical card to buy from a dispensary in Illinois?▼▲

No, not exclusively. While some dispensaries in the state are not approved for recreational sales, anyone 21 years of age or older can purchase marijuana from licensed retail dispensaries.

Do you need a medical card to enter a dispensary in Illinois?▼▲

No. While you may make it into the admittance or lobby area of a dispensary, you will be checked for a valid medical marijuana card or a government issued ID to make sure that you are 21+ years old before you are allowed on the floor to browse or purchase marijuana.

It is legal to smoke in one's own home or in cannabis-related establishments. Users are not allowed to smoke in public, in any motor vehicle, or around minors.

Medical card holders can cultivate up to 5 plants at home. Recreational users are prohibited from growing cannabis. The state is allotting 20 cultivation licenses to be given out to cultivate up to 5,000 sq. ft. of land.

Medical card holders can cultivate up to 5 plants at home. A citation of approximately $200 will be written for those who violate the law regarding at-home cultivation.

Marijuana may be transported legally within the state of Illinois if the product is sealed in an odor-proof, child resistant package. Like alcohol, the product must also be considered "reasonably inaccessible" from the driver.

Is Marijuana Delivery Legal in Illinois?▼▲

Illinois marijuana laws prevent medical marijuana dispensaries from delivering products to cardholders and recreational users alike. Products can, however, be transported by a caregiver from a dispensary to their registered patient.

Marijuana and Driving in Illinois▼▲

A driver may not operate a motor vehicle while impaired by cannabis, whether used medically or recreationally.

Notes on Marijuana Laws in Illinois ▼▲

Whether you're a longtime medical marijuana patient, just starting your medical marijuana journey or looking forward to recreational legalization in the state, Leafbuyer has your back. We've got the best dispensaries with the sweetest deals, so you'll never be left scouring the streets for a dispensary just because you're traveling. For more, check out our recommended Illinois dispensaries below, or use our interactive map or click the link for the city closest to you.